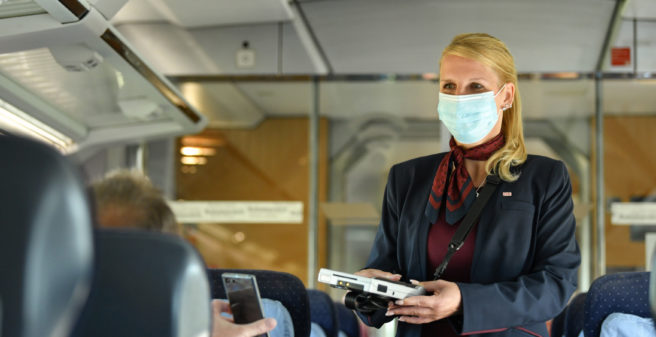 There is no increased risk of COVID19 for employees in the long-distance trains of Deutsche Bahn (DB). This is the results of a joint study by DB Fernverkehr and the Charité Research Organisation. The aim of the study, which is scheduled to last several months, is to gain scientifically sound insights into the infection incidence in the railway.

The central question was whether the situation of train conductors, who are exposed to a large number of customer contacts during their work, differs from that of those groups of employees who have little or no contact with other people during their work. Of the 1,072 evaluable PCR tests for the detection of acute infections, only one factory employee was positive. All other test results were negative. Of the 1,064 evaluable blood tests for antibodies, the train attendants had the lowest value of 1.3 percent. For the other employee groups without customer contact (train drivers and maintenance staff), the figure was 2.7 per cent. This means that the proportion of train conductors with detected SARS-CoV-2 antibodies was not increased in the investigated sample compared to the other occupational groups.

Martin Seiler, member of the DB Board of Management responsible for Human Resources: “We now have the first scientific findings in Germany on corona events in trains. What is important for us as an employer is that our employees on board are not exposed to an increased risk of contracting COVID19. The initial results of the study show that our protection and hygiene concept is working.

According to the analyses of the Charité Research Organisation (CRO), there is no evidence of an increased rate of SARS-CoV-2 antibodies in train attendants, who usually stay significantly longer in trains than passengers, which could be an indication of a possibly increased risk of infection in trains.

Berthold Huber, Member of the DB Board of Management for Passenger Transportation: “We must continue to be vigilant, but there is no reason to worry about rail travel. Travelling by train is safe and the hygiene and protective measures that the Federal Government, the Länder and we as DB have taken together are working”.

In an initial test phase from 29 June to 3 July, more than 600 randomly selected train attendants, over 200 train drivers and more than 200 maintenance technicians in long-distance transport plants in Berlin, Hamburg, Frankfurt am Main and Munich took part voluntarily. Based on the sample size chosen, the results of the test are representative of the population of the employee groups examined. The subjects were subjected to a PCR test of nose and throat swabs and an antibody test. In this way, both the acute infection status was recorded and it was checked whether a corona infection had already occurred at an earlier stage. In addition, the participants used a questionnaire to provide information on previous illnesses, among other things, to enable epidemiological findings to be derived.