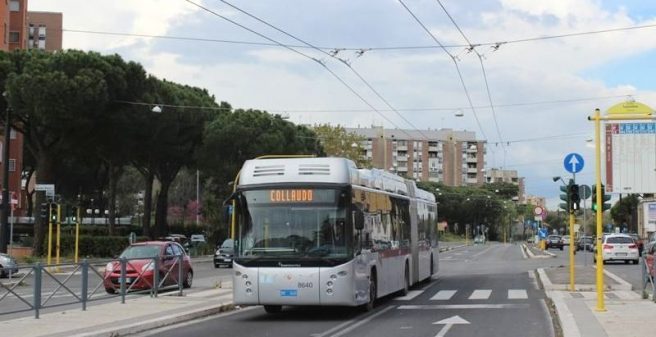 After almost 10 years of planning and construction phase, the first route of Rome’s second new trolleybus network opened on 8 July 2019.

Municipally owned ATAC (Agenzia del trasporto autoferrotranviario del Comune di Roma) operates the new line 74 between Metro line B terminus Laurentina and the new suburban area of Fonte Laurentina, a total length of some 4 km. The route passes ATAC’s depot Tor Pagnotta where the BredaMenarini/Skoda articulated trolleybuses have their homebase. For short stretches of the route without overhead line, on the termini of route 74, the trolleybuses use an diesel motor as generator for the electrice drive. 45 of these buses have been supplied already in 2010-11 and were stored until in 2017 some of them started service on route 90 and during peak hours also on route 60, the only other trolleybus lines in the Italian capital. Here they run alongside to a fleet of 30 articulated trolleybuses with additional traction batteries, supplied in 2004/5 by Solaris/Ganz. Modern trolleybus were reintroduced in Rome in 2005 after absence of 33 years – the first network (1937-1972) had its maximum extend in 1957 with 23 lines and 420 trolleybuses in operation.

Additional route 72 and 73 may open as branch lines of the new route in the near future.

A scheme of the new route 74 can be found at: