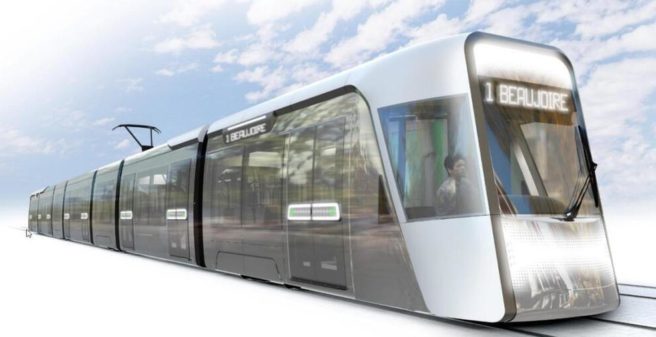 The design of Nantes’ new tram generation had been presented a year ago. To build them, Nantes Métropole has just chosen Alstom. It will be the fourth generation of trams of France’s first “modern” tram system which had been inaugurated exactly 35 years ago. Instead the initially named 61 trams, only 49 trams have been ordered (see below).

In March 2019, Nantes Métropole and Semitan (Nantes urban transport operator) presented the design which has been elaborated by the Tours- and Paris-based RCP agency (Régine Charvet Pello). The name of the design concept chosen for Nantes’ new tramway generation is called “design open to the outside”, allowing to discover or contemplate the city by large windows. The exterior is characterized by games of transparency, reflection and light for an airy and soothing atmosphere.

France is known for specific and modern tram designs as each city has its own tram design. RCP was also responsible for the design of the trams in Paris (line T3), Le Mans, Angers, Tours and Rhônexpress in Lyon as well as for Algiers, Constantine and Oran in Algeria.

Following the design process and an international tender, Alstom was chosen on 18 June 2020 to deliver the new trams. In total, 49 new 100 % low-floor trams will be delivered to Nantes from 2022 on. The start of operation is planned for 2023. According to the local press, the contract has a total value of ca. 200 million euros, equalling 4.0 million Euro per tram. The 48 m long seven-car Citadis trams will replace the 46 Alstom (then Alsthom) “Tramway Francais Standard 1” (TFS-1) trams, built in 1984 – 1994 which had been fitted with low-floor center sections from 1992 on.

Nantes’ tram system currently has a length of 44.3 km which is operated with 3 lines. The yearly ridership is around 70.6 million passengers. Compared to other French tram cities, Nantes’ rolling stock is quite diverse with the following vehicles: