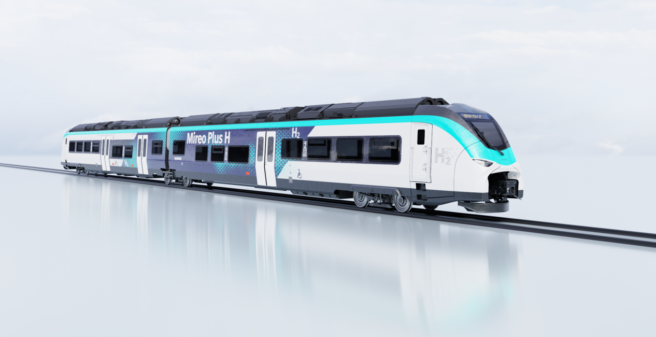 The Bavarian State Ministers for Economic Affairs and for Transport support the testing in Bavaria of a hydrogen-powered train developed by Siemens Mobility GmbH in Bavaria. The two-car train is to be tested on the Augsburg – Füssen route, among others, beginning in mid-2023. The pilot operation in the rail network of Bayerische Regiobahn (BRB) is initially planned for 30 months. The hydrogen-powered train will be stationed in Augsburg during this time.
A Memorandum of Understanding to this effect was signed on Monday, July 12th 2021 by Minister for Economic Affairs Hubert Aiwanger, Minister for Transport Kerstin Schreyer, and top representatives of Siemens Mobility and Bayerische Regiobahn (BRB).

The hydrogen-powered train is being developed on the basis of the Mireo Plus H platform from Siemens Mobility. It is designed to operate on non-electrified rail lines and has a range of up to 800 kilometers. The main components of the hydrogen traction drive are two fuel cells mounted on the roof. The system uses the latest generation of batteries from the Saft company that are installed beneath the floor. The train will be presented to the public in the spring of 2022. The first test runs in Bavaria are planned for 2023, before the train officially enters passenger service in January 2024.

The development of alternative drives in rail transport is part of Siemens Mobility’s sustainability strategy. The company is a pioneer when it comes to sustainable mobility and will offer the successful Mireo regional train as both a hydrogen and a battery-powered unit. The well-known Mireo Plus H platform is being used but is being equipped with a new generation of batteries to further improve both performance and passenger comfort.

Back in November 2020, Deutsche Bahn and Siemens announced that they would be jointly launching a fuel cell train including the corresponding refuelling infrastructure.

The system consisting of trains and infrastructure is intended to replace dieselpowered trainsets operating on regional routes and further reduce CO2 emissions. A one-year test of the train in the region around the city of Tübingen is planned. The state government of Baden-Württemberg is providing support for the project, and the Federal Ministry for Transport and Digital Infrastructure (BMVI) has announced its intention to fund the project.

Deutsche Bahn is developing a new type of fueling station that can refuel the train in the same time as a diesel-powered train. The hydrogen will be produced on site in Tübingen using traction electricity generated from renewable sources. DB will partially refit its maintenance shop in the city of Ulm to service the new hydrogen train.

During its planned trial operation between Tübingen, Horb and Pforzheim in 2024, the train will replace a conventional diesel-powered unit running on the route. The new hydrogen drive will save around 330 tons of CO2 in one year. DB currently operates around 1,300 diesel-powered trains in regional service, and roughly 40 percent of DB’s
33,000-kilometer rail network is not electrified. In addition to the option of further electrifying the system, the use of hydrogen-powered trains offers one possibility for DB becoming climate-neutral.

Officially, the joint funding project is called “H2goesRail”. The Federal Ministry of Transport and Digital Infrastructure (BMVI) has announced funding through the National Innovation Programme Hydrogen and Fuel Cell Technology (NIP 2). NIP 2 is coordinated by the National Organisation Hydrogen and Fuel Cell Technology (NOW) GmbH and implemented by the Project Management Organisation Jülich.

With hydrogen drive systems, the reaction of hydrogen and oxygen produces electrical energy and water as a “waste product”. These trains can be deployed by DB as a way to become climate-neutral and replace diesel vehicles with alternative drive systems. Green electricity is used to produce the environmentally friendly green hydrogen. DB Energie is responsible for its supply.

The hydrogen is produced by electrolysis in a DB Energie mobile filling station at the DB Regio plant in Tübingen. In the so-called electrolyser, water is split into hydrogen and oxygen by means of electricity. Compressed in a compressor, the hydrogen is stored in a mobile storage unit. Prior to the refuelling process, the green fuel is processed and cooled in the adjacent tank trailer. The mobile structure makes further test projects possible. DB Energie develops, tests and optimises the necessary hydrogen infrastructure.

The train is refueled with hydrogen in a novel process: for the first time the 15 minutes, won’t take longer than refueling a diesel multiple unit. This is an important factor considering the closely timed DB train schedules in regional traffic. This means that hydrogen technology is competitive with the diesel fuel used in everyday operations until now.

The DB Regio workshop in Ulm will be converted for the maintenance of hydrogen powered trains. Extensively trained DB Regio staff who are supported by Siemens Mobility employees can then maintain the hydrogen train there.

Trial operation between Tübingen, Horb and Pforzheim will begin in 2024 and last for one year. Approximately 120,000 kilometers of scheduled rail service are planned. The route is particularly suitable based on the timetable intervals and topography. The Mireo Plus H from Siemens will replace a diesel railcar used on this route and save about 330 tons of CO2.

The Mireo Plus H development

Siemens and Ballard Power Systems Inc., a Canadian manufacturer of fuel cells, have launched the joint development of a fuel cell drive for the Siemens Mireo train platform in 2018. Working together, the two companies are developing a new generation of fuel cells with an especially long lifecycle and high power density as well as improved efficiency. RWTH Aachen University is a partner in the research project. The German Federal Ministry for Transportation and Digital Infrastructure (BMVI) are supporting Siemens and RWTH Aachen with project funding of roughly €12 million as part of the Ministry’s “National Hydrogen and Fuel Cell Technology Innovation Program”. The program is being coordinated by the National Organization for Hydrogen and Fuel Cell Technology (NOW GmbH).

The new Mireo regional and commuter platform from Siemens was specially developed for sustainable and flexible use and is therefore predestined for testing an alternative drive. Thanks to lightweight construction, energy-efficient components and intelligent on-board power supply management, the Mireo consumes up to 25 percent less energy – compared to trains with similar passenger capacities. The first Mireo electric multiple units have been in service since mid-2020, namely 24 three-car trains at DB Regio in the Rhine Valley, 57 further three-car trains run at DB Regio as S-Bahn Rhein Neckar and six vehicles at Mittelrheinbahn. There are orders for 44 three-car Mireo for the Augsburg networks (Go Ahead), seven three-car trains for the Karlruher Netz 7b (DB Regio), 18 three-car trains for the Lausitz network (DB Regio), six four-car trains for the Donau-Isar network (DB Regio) and four-car trains for the Regensburg/Donautal network (Agilis). In the battery version Mireo Plus B, 20 trains for the Ortenau network around Offenburg, three for the Hermann-Hesse Bahn and 26 vehicles for the East Brandenburg network (NEB) have been ordered so far. In total, orders have been placed for over 211 vehicles, 49 of which are two-car Mireo Plus B battery multiple units. We reported on the last order for the Ostbrandenburg network here.