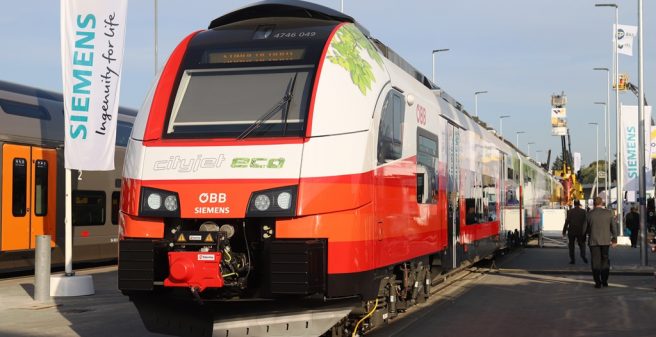 The three-car Siemens/ ÖBB Desiro Mainline/ Cityjet eco has been presented at InnoTrans 2018 for the first time and has now been approved for passenger operation in Austria by BMVIT - operation will start on 2 September 2019 I Photo: UTM

ÖBB and Siemens Mobility have developed an emission-free battery-train which received its’ type approval from the Austrian Ministry for Transport, Innovation and Technology (BMVIT) on 24 August 2019. Passenger operation on selected non-electrified rail lines will begin in early September in Lower Austria.

On Saturday, August 24, 2019, Klaus Garstenauer, Head of Local and Regional Transport of ÖBB Personenverkehr AG, together with Lower Austria’s Councilor for Mobility Ludwig Schleritzko, presented the new ÖBB Cityjet eco as part of the 130th anniversary of the Franz-Josefs railway line.

The train developed by Siemens Mobility and ÖBB is intended for use on non-electrified lines in order to replace diesel multiple units in the future. A battery system with a capacity of 528 kWh has been installed on the roof.

The battery system located on the middle car of the converted trainset is comprised of three battery containers, two DC/DC converters, a battery cooler and other electronic components. The system uses lithium-titanate batteries (LTO technology). Compared with conventional lithium-ion batteries, these modified batteries allow significantly higher charging currents for fast charging. Thanks to a special thermal concept for the battery containers, it is expected that external weather conditions will have no influence on battery life and their charge status. When the batteries are ready for series production, they should have a lifetime of around 15 years, which means they will have to be replaced only once over the entire service life of the train. According to press reports, the battery including additional components add an additional 14 tonnes to the roof of the vehicle, which was first presented at the InnoTrans 2018 in Berlin. The vehicle is a three-car with a total length of 75.152 m and two bogies per car. The battery is charged on electrified sections via the pantograph under the standard catenary. Compared to diesel vehicles, the ÖBB Cityjet eco can then handle the non-electrified sections virtually without noise and emissions. The range is expected to be around 80 – 100 km.

Today, 73% of Austria’s railway network is electrified. The remaining 1,300 km of the railway lines are not electrified and operated with diesel trains. There are future plans to switch to battery or hydrogen propulsion. Lower Austria is the state with the most non-electrified routes, which is why the use of battery-operated trains in this region would be particularly useful.

Cityjet is the brand of the Austrian national railways used for commuter and regional trains. The branding and livery was launched in 2015 with the livery of the first Siemens Mainline trains to Austria. Since 2019, it is also rolled out on other vehicles and services such as the S-Bahn Vorarlberg which is operated with Bombardier Talent Classic trains or other regional diesel trains.

Start of operation in Lower Austria

After extensive testing of the technology and evaluation of the possible routes, the first use in passenger service in Lower Austria now starts on the Kamptalbahn, the Traisentalbahn and the Erlauftalbahn on 2 September 2019. The timetable foresees the following:

The batteries are tested during passenger operation. The aim is to use the findings from the pilot project to develop a series solution on several non-electrified lines. Siemens is already working on the battery variant of the new electric train generation Mireo Plus B, where the B stands for battery.

According to a press release from the Baden-Württemberg Ministry of Transport, the southern-german Land plans to award the contract for the supply and maintenance of 20 battery-electric multiple units for the so-called Ortenau network 8 to Siemens Mobility GmbH. The Ortenau network is a diesel commuter train which is planned to be converted to emission-free/ battery operation.

Emission-free trains are on the rise worldwide. In Germany alone, several tenders for emission-free regional trains are being implemented or prepared at the moment. In addition to the Mireo Plus B variant, Siemens is also working on a hydrogen train variant, Mireo Plus H, which combines the fuel cell with batteries, allowing for longer catenary-free ranges. Apart from Siemens, Alstom has already developed the iLint hydrogen train, Bombardier Transportation the TALENT 3 Battery Train (BEMU) and Stadler the battery-variant of its’ FLIRT platform, called FLIRT Akku. 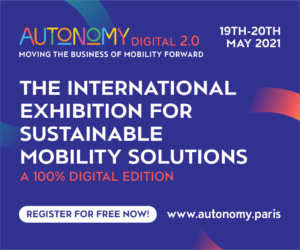