Skoda Astra trams out of service in Plzen 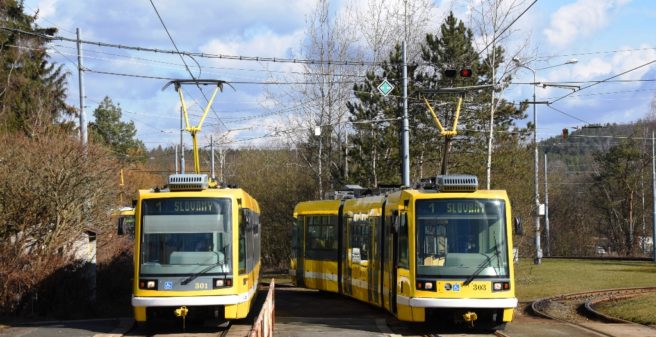 In 1997, the then Plzen-based manufacturer Škoda – Dopravní technika (now Škoda Transportation) produced the first two prototypes of a completely new, partially low-floor tramway model. The vehicles’ official designation was “Škoda Inekon LTM 10.08”, but the trams were also commercially marketed under the brand name ASTRA (ASynchronous TRAM). Although this designation was soon changed due to the similarity of the name with other products in different market segments, it continued to be used in public because of its simplicity. Trams of this type manufactured some years later (for Brno) took the commercial name ANITRA. Škoda later also used the designation 03T for the LTM 10.08 trams. A total of 11 Škoda 03T trams (no. 300-310) ran in Plzen, but were suffering from a low operational reliability right from the very beginning. At that time, these were the first low-floor trams of Plzen’s public transport system. Therefore, an attempt was made to use at least two trams on each of the three tram lines. However, due to various deficiencies, often not even these six trams were in a condition to provide passenger services. The operational stability improved somewhat once some of the mechanical brake elements were replaced and also thanks to a “full service” maintenance contract, under which all maintenance services had to be conducted by the manufacturer (by means of the transport company’s own workshops).

Otherwise, there were little changes made to the vehicles over their lifespan in Plzen. All tramcars of this series were gradually withdrawn from service in Plzen between February 2019 and December 2020. Only a few continued to operate on a less regular basis until the official end of service was announced for 18 March 2021 by PMDP Plzeňské městské dopravní podniky, a.s., the public transport operator in the city, and a formal farewell ceremony was held. Prototype No. 300 had already been out of service since 2007 due to a damage caused by a serious car accident and was scrapped in May 2008. No. 301 will be preserved in Plzen’s heritage fleet, while several others were sold as a source of spare parts to the Brno and Ostrava transport companies; others were sold to private individuals.

In total, the manufacturer built and delivered 48 vehicles between 1998 and 2006 to the following transport companies in the Czech Republic:

Test runs were also carried out in other cities, including the capital city of Prague.