Slovenian state railway is modernizing itself with IVU.rail, a new Stadler fleet and new infrastructure 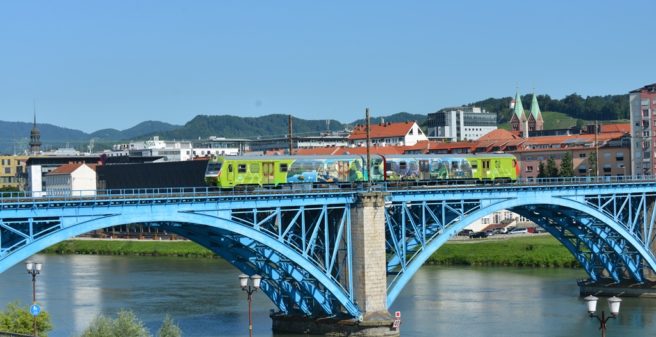 The Slovenian State Railways SŽ currently operates a standard-gauge route network of 1,209 km in length. About half of it (610 km) is electrified. In 2017, 14.42 million passengers were carried. It should be noted that in the state, which is just as big as Hesse, only 2 million people live.

The railway in Slovenia is currently experiencing a surge of renewal. In addition to the new Stadler vehicles currently being delivered (see below) and numerous infrastructure projects, operations and the associated operational planning will also be even more efficient in the future. In the future, the SŽ will plan and dispatch its entire train fleet including staff with IVU.rail from IVU Traffic Technologies. The Berlin IT specialist for railways and public transport prevailed in a Europe-wide tendering process.

Every day, more than 500 passenger trains of the Slovenian of national railway (Slovenske železnice, SŽ) bring their passengers to their destinations. SŽ transports almost 15 million people a year on numerous domestic and international journeys in Slovenia and in other European countries such as Austria, Croatia or Germany.

IVU’s integrated standard system enables SŽ to implement a continuous digital workflow across all operational areas. In this way, it is possible to control vehicle and duty planning, as well as staff and vehicle dispatching within one system. To this end, IVU.rail integrates the existing operational and planning processes at SŽ, which previously often took place manually, in order to improve workflows and ensure more efficient use of resources. Staff dispatching benefits from the mobile app IVU.pad, which facilitates communication between dispatch managers and mobile staff. A powerful optimisation system also supports users, planners and dispatch managers with sophisticated algorithms for complex tasks such as extensive variant planning or last-minute changes to the timetable. The first journeys are to be planned and scheduled with IVU.rail from the end of 2020.

“With IVU, we have gained a strong and reliable partner for the future,” says Dušan Mes, Director‑General of the Slovenian national railway. “Thanks to the integrated planning and scheduling of IVU.rail, we can now standardise many of our previously manual tasks in a digital process and thus work much more efficiently. This will increase our competitiveness, especially with regard to our targeted growth in the European market.”

“We are very proud that the Slovenian national railway has placed its trust in IVU as a partner for the integrated planning and dispatching of its rail fleet,” says Martin Müller-Elschner, CEO of IVU Traffic Technologies. “SŽ is a fundamental component of the public transport system in Slovenia, offering its customers safe, reliable and environmentally friendly train journeys. We see SŽ’s decision to use IVU.rail as further proof of the efficiency of our software.”

In addition to passenger transport, the SŽ also operates freight transport. It is the biggest logistics company and the largest railway cargo carrier in Slovenia as well as one of the leading regional cargo operators. Every day, more than 130 SŽ cargo trains run on 1,229 kilometres of the Slovenian railway network, as well as on the Croatian and Austrian network, where SŽ already provides services with its own traction. SŽ transports more than 20 million tons of cargo a year, of which more than 90% cross-border.

In addition to the renewal of the operational planning, the SŽ also invested heavily in the renewal of the partially outdated vehicle fleet. The SŽ has a very diverse fleet of vehicles, including consists of German, French and American licensed buildings. The SŽ also uses Italian-made electric locomotives, such as These include the 342 and 362 series as well as over 30 Siemens Desiro (312 series) electric railcars from the years 2000 – 2002. The fleet currently consists of the following vehicles:

New vehicles are already on the way. Between April 2018 and May 2019, the SŽ ordered a total of 52 new Stadler trains of various types, the delivery of which has already started:

Investments in the Slovenian rail infrastructure have increased significantly in recent years. The annual budget for investments in rail is between 200 and 300 million euros per year. Together with the Slovenian Infrastructure Agency (which owns the Slovenian public railway infrastructure and provides state funding), SŽ recently completed a number of important projects, including the network-wide rollout of GSM-R and the installation of ETCS on most of the Slovenian sections of the European core network corridors and renewal several network sections.

A total of 16 infrastructure projects are currently running in the Slovenian network – six large and ten smaller projects – with an order value of several hundred million euros.