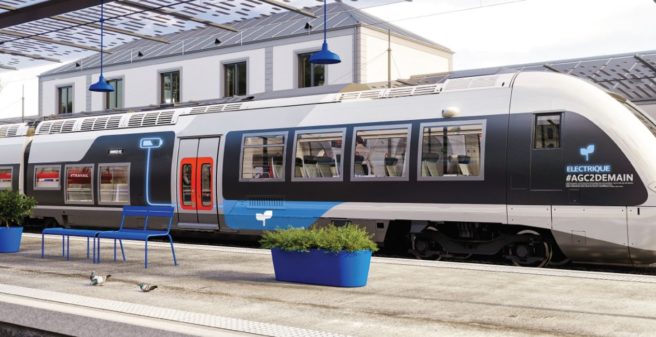 The project has a total investment volume of 38 million euros. The five regions are each contributing €5.4 million, SNCF €6 million and Bombardier €5.5 million. The conversion of the first vehicle will take place at the end of 2021 at Bombardier’s French plant in Crespin (in Hauts de France, northern France). The type test and validation of the first vehicle is planned for 2022, so that passenger service can begin in 2023. The conversion of the remaining four vehicles will thus take place in parallel. The deployment is planned on the following lines:

The conversion of the diesel vehicles is part of SNCF’s strategy to make its fleet “greener”. Of the almost 30,000 km long route network, approx. 55 % is not electrified. The electrified network is divided into two sub-networks, which for historical reasons are operated with 1,500 V DC and 25 kV 50 Hz AC. For this reason, regional trains in particular are already designed as dual-system (DC/AC or diesel-electric) or three-system (diesel-electric + DC/AC) vehicles. The advantage compared to diesel-mechanical systems is that the electric drive train is already existing which eases the conversion into Battery trains (or BEMU’s).

Now the battery is added as an energy storage device to replace the diesel engines. The two MAN diesel engines with 1324 kW (total) located in the underfloor are replaced by Li-ion traction batteries, which are charged while under the overhead line and during braking. The range of the battery train (BEMU) is to be 80 km. The service life is given as 10 years. No details were given about the battery technology. In 2019, the Swiss battery manufacturer announced a cooperation agreement with Bombardier (read here).

In France alone, there is great potential for battery trains. The SNCF procured a total of 700 AGC railcars between 2004 and 2011. Of these, 185 are diesel-electric with dual-system equipment (series B81500, diesel + 1,500 V DC) and 140 diesel-electric with triple-system equipment (series B 82500, diesel + 1,500 V DC + 25 kV AC). It is currently not known if and when a comprehensive retrofitting of the diesel railcars throughout France is planned.

Bombardier began developing battery-powered electric multiple units in 2016. A test vehicle was originally scheduled to go into service in 2019. However, the project has been delayed (read here).

A side note: Bombardier Transportation will be taken over by its French rival Alstom on 29 January.