Solaris gets the largest share: 250 CNG buses for Madrid 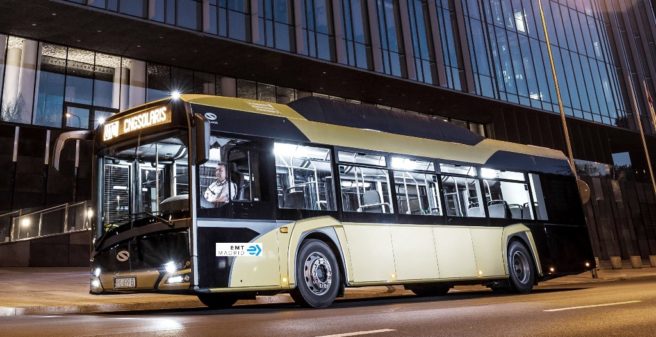 Solaris Bus & Coach has been selected to supply 250 “Solaris Urbino 12” compressed natural gas buses for Madrid, so far largest contract in Madrid. The contract requires the first units to be delivered before the end of the year.

Empresa Municipal de Transportes de Madrid (EMT) is the largest public transport operator in Spain and the second largest in Europe. The operator’s strategy plan includes the ambitious goal of having only fully electric, hybrid and CNG buses operating on the streets of Madrid by 2023, as a matter of fact, the entire existing fleet of diesel vehicles will be replaced with CNG buses.

Earlier this year, EMT issued a significant Request for Offers for the supply of up to 520 12-metre CNG vehicles, and out of these, 250 will be supplied by the CAF Group subsidiary as part of a contract totalling €73.4 million. The delivery schedule calls for the buses to be supplied between 2021 and 2023, with 91 units expected to be providing revenue service on the streets of Madrid later this year.

The buses purchased by the capital city’s operator will be equipped with 239 kW engines adapted to run on compressed natural gas (CNG). Five CNG storage tanks with a total capacity of 1,575 litres will be mounted on the front of the vehicle’s roof. This amount of fuel, together with a reserve capacity to guarantee the minimum required CNG concentration, will ensure the buses can run at least 400 km on a single fill up.

EMT opted for high quality equipment both for the passenger compartment, which has a capacity for up to 100 passengers, and for the driver cab. These include a modern and complete passenger information system, USB ports to charge mobile devices and a video surveillance system for improved safety.

This is the largest single order for Solaris in Spain so far, although the companybus order Solris has secured to date in Madrid, a spanish market in which Solaris has already supplied over 250 vehicles, including electric, hybrid or CNG models in cities such as Barcelona, Burgos, Elche, Bilbao, Castellon, Badalona and San Sebastián.