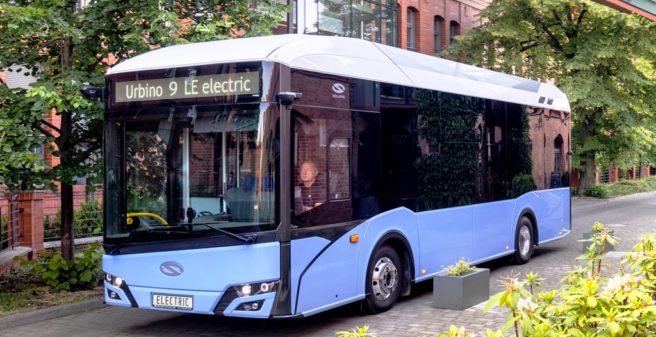 30 September 2021: The Solaris family of electric buses has grown by a new member: the brandnew “Solaris Urbino 9 LE electric”. The new electric bus saw the light of day via an online presentation. It is a nine-metre-long low-entry bus that is electrically powered by batteries. Solaris sees it as a solution for both urban and interurban transport and describes it as an “excellent link between urban and suburban transport in conurbations”.

The new bus is powered by an electric, liquid-cooled central motor with a maximum output of 220 kWdriving the second axle. Depending on customer requirements, it can be equipped with “Solaris High Energy batteries”, i.e. batteries with a high energy density, or with “Solaris High Power batteries”. The High Energy batteries are characterised by a high energy density and a high capacity and are designed to be charged mainly overnight at the depot. Their maximum capacity is more than 350 kWh. Alternatively, the “high-power batteries”, which the customer can also opt for, are primarily characterised by fast recharging with high charging power.

In any case, the passenger enters the bus in the low-floor area between the two doors with an entry height of 320 mm. From door 1 up to and including door 2, the coach is low-floor, after which there are two steps up to the rear, as is usual with low-entry buses. The majority of the seats are located in the rear of the bus.

The interactive dashboard with touch screens provides even more safety for passengers and driver. Instead of conventional rear-view mirrors, the new small bus from Solaris has the “MirrorEye system”: several cameras show the driver what is going on around the bus and thus also behind him on the road. The problem of the blind spot, which cannot be seen through the mirrors, has been solved by the “Mobileye Shield+ System”: if there is a cyclist, pedestrian or other vehicle next to the bus, the driver is warned visually and acoustically.

In addition, the “Urbino 9 LE electric” is prepared for the “eSConnect” fleet management system developed by Solaris itself, which records the telematics data of the vehicle and thus not only ensures that, for example, a malfunction can be quickly rectified, but above all also recognises where a problem might occur in the future.

Solaris has already sold 17 cars of its new “Urbino 9 LE electric”. 8 cars are going to Italy, to SASA (Sociétà Autobus Servizi d’ Area) in Bolzano/Bozen. Six of the 9 other vehicles will go to the Polish city of Zyrardòw, two to Cieszyn and one to Zawiercie.

The predecessor model, the somewhat shorter Solaris Urbino 8.9 LE electric, is also still in the programme. However, it will only be available for a short time.

Door arrangement: single-width at the front, double-width in the middle

Entry height at both doors: 320 mm

Seating capacity: 27 to 31, depending on arrangement of engine and batteries, total possible including standing room up to 73 passengers (depending on equipment)

“Special use areas” for wheelchairs and prams at door 2

Batteries: Lithium-ion batteries, capacity according to battery equipment desired by the customer.

Operating time: up to 24 hours, depending on the battery capacity and charge required by the customer

Suspension: ECAS with suspension and kneeling