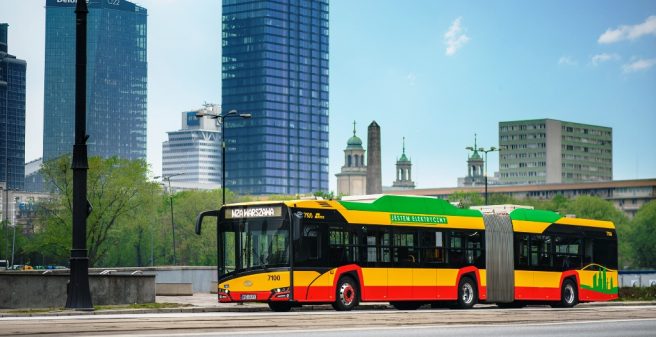 Warsaw’s city bus operator Miejskie Zakłady Autobusowe w Warszawie (MZA) acquired 130 electric buses for nearly 400 million PLN (ca. 92 million EUR). This biggest yet commission for zero-emission buses in Europe was won by Solaris. The articulated Urbino 18 electric will be delivered to the capital of Poland in 2020.

The order for 130 articulated electric buses is the biggest ever tender of its kind in Europe. The electric buses of Solaris have been ordered so far by 60 cities in 17 countries since 2011. Pursuant to the contract, the company will deliver the first buses in 2020. The procurement for the 130 buses is supported by European funds and at the same time one of the largest e-mobility investments in Europe. Together with the 130 Solaris e-buses, Warsaw bus operator MZA (Miejskie Zakłady Autobusowe Sp.z o.o.) will have a fleet of nearly 400 zero and low-emission buses.

The 130 articulated electric Urbinos for MZA will be fitted with Solaris High Power batteries with a capacity of 150 kWh, and for which the producer grants a seven-year warranty, as per requirement of the awarding authority. The electric power in those batteries will be recharged by means of depot charging stations of the plug-in type and by means of pantographs. The bus will feature two charging sockets: one above the right wheel arch and the other placed behind the last door, whereas the pantograph will be mounted on the roof. Boasting over 400 kW of power, the fast-charging stations will be deployed in various corners of the city. EkoEnergetyka will build a total of 20 charging stations at a total cost of 8.3 million PLN (ca. 1.9 Mio. EUR) in seven locations – as many as six at the Wilanów loop, four more on Chomiczówka, and two respectively at Szczęśliwice, Esperanto, Nowodworach, Browarna and Młynów.

The drive unit of the electric articulated buses for Warsaw will consist of an axle with two electric engines of 110 kW each. Even though electric buses are already much cheaper to operate than diesel ones, the vehicles for operator MZA are getting also a voltage converter for the traction motor, produced in SiC (Silicon Carbide) technology, which will help to additionally reduce energy consumption.

So far Solaris, which is owned by the CAF group since September 2018, has delivered over 1000 city buses to Warsaw, including 20 electric ones. Electric buses can be seen in use daily, operating bus line 222. Designed and produced by Solaris, the Urbino 12 electric was named best city bus in Europe in 2017.