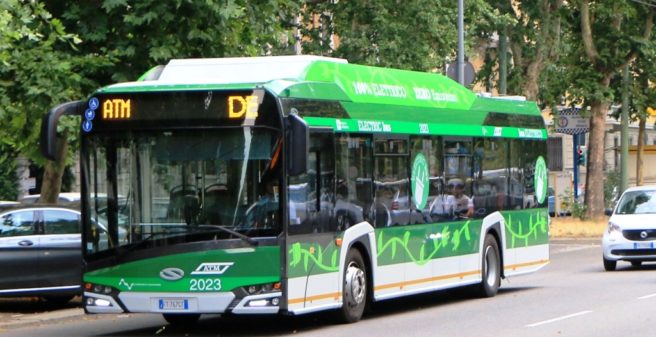 At the world’s largest bus trade fair, “Busworld” in Brussels in October 2019, Solaris introduced “Solaris Talks,“ a new event format to maintain contacts with its customers, the trade press and the bus industry in general. The purpose of such a Solaris Talk is not only to cultivate contacts, to get into conversation or to stay in conversation, but of course also to inform about Solaris, to present tendencies in the development of Solaris (“where is the journey going?“), and to present a new product and the considerations that have led to this product.

While the first “Solaris Talk” in 2019 took place at the fair in Brussels, Corona 2021 “put a leg up” there. Thus, the “Solaris Talk 2021” took place on the internet with the bus manufacturer’s speakers, among them CEO Javier Calleja, “at home” in the factory in Bolechowo, Poland.

Let’s begin the report from this year’s “Talk” with a short historical review. Solaris was founded as “Neoplan Polska” after the “Wende”. This was no coincidence, as the founder of the company, Krzysztof Olszewski, had been a plant manager at Neoplan’s factory in Berlin (Plant 3) before returning to Poland and brought his knowledge of bus construction with him from Neoplan. In Bolechowo, he was able to purchase a former military site at a reasonable price to house the firm’s production facilities.

Neoplan Polska initially began to build Neoplan buses under licence for the Polish market. The Neoplan headquarters in Stuttgart actively supported the company in this endeavour. The first buses built in Bolechowo went to MPK, the municipal transport company in Bolechowo’s neighbouring city of Poznan.

In 1996, Neoplan Polska built their first self-designed public transport bus. The 12-metre long bus was given the type name “Urbino” (urbs (Latin) = city), and was called “Urbino 12”. And the “child” also got a new brand name: “Solaris”. That first ever Solaris bus went back to MPK in Poznan in March 1996, and is still alive today. On the occasion of the “20th anniversary of Solaris” in summer 2016, Solaris lovingly restored the car, and the author had the pleasure of driving it himself.

Krzysztof Olszewski was a visionary. Already in the first decade of this millennium he recognised: “The future of transport is electric!” At the same time, other manufacturers declared: “Electric? We don’t need that. We have such good diesel engines” (Which was not so wrong after all. A Euro 5 diesel engine at that time already emitted more than 90 percent less pollutants than a Euro 0 engine from around 1990).

In 2021, the Solaris brand will be 25 years old. In 2019, the Olszweski family sold 100% of the company to the Spanish CAF Group (Construciones y Auxiliar Ferrocarriles. Xavier Colleja, a manager from CAF, is now the company’s CEO.

Today, the Solaris production programme still includes pure diesel buses that comply with the Euro 6 emission standard. However, their share of the factory’s total output is decreasing. More and more electric buses, trolleybuses and hydrogen buses are now being built in Bolechowo. Colleja in his opening statement: “E-Mobility: there is no other way!”

Today, Solaris buses can be found almost everywhere in Europe. For example, 30 “Urbino 12 electric” buses are about to be delivered to Venice. They will be recharged via pantograph. Currently also in the process are deliveries to Switzerland: three each for the VbL in Lucerne and for the “Zugerland Verkehrs Betriebe” (ZVB) in Zug. Further a large order has been received from Romania: 123 Urbino 12 electric are going to various different cities. These are partly recharged via pantograph, and partly via plug-in.  In addition, more than 100 trolleybuses have been delivered to Romania.

Since 2015, battery technology has been developing rapidly. Within this decade, we will see new battery generations that will offer a range of up to 400 kilometres in 12-metre buses. This means that every route of every transport company in every city can be driven 24 hours a day.

Currently, 66 % of all Solaris electric buses are ordered with high-power batteries and 34 % with high-energy batteries, as customers still attach great importance to fast recharging (for example at the final stop of a line).

For the double-articulated bus “Urbino 24” electric, which is approx. 24 metres long, Solaris announces a battery capacity of 740 kWh.

In 2020, Solaris increased sales of its electric buses by the “small matter” of 276%! And 44% of all buses delivered by Solaris already had an alternative drive.

An important question is the future development of batteries: Which type of battery is most suitable for which purpose? What solutions are there for recharging the batteries? Statement from the Solaris Talks: “We are continuing to develop.“

Plug-in charging (usually overnight at the depot) offers flexibility in the use of electric buses. “Because no recharging stations are needed at the final stop, every car can run completely freely on every course of every line.” With “high-power-charging”, the recharging takes place with a higher charging current.

With pantograph recharging, batteries with a lower capacity can be used. And there are two different techniques, he said:

– “Panto up”: the pantograph ascends from the roof of the bus to the charging station.

– “Panto down”: the pantograph is mounted at the charging station and descends onto the bus.

Overallall, re-charging on certain stops along the route offers the advantage of an almost unlimited range.

Regarding the current deliveries: 77 % of all electric Solaris are buses for recharging via pantograph, while only 23 % are “plug-in chargers”.

„In-motion charging” was mentioned as a sub-case of recharging on the line: the bus drives partially under the overhead line of a trolley bus line and hooks up to the overhead line here, whereby it not only drives under the line with the power from the line, but also charges its batteries at the same time. A similar set-up can be seen with the successful “BOB” (battery trolleybuses) from Solaris on the Solingen line 695. A potential disadvantage to this solution is that it requires a trolleybus overhead line. In light of the fact that trolleybus overhead lines are expensive, BOBs are really only an option for cities that have an existing trolleybus system. BOBs in cities without trolleybuses are not really to be expected.

At the factory premises in Bolechowo, Solaris has built a “charging park” that is powered by solar panels on its roof. Here, up to eight buses can be charged simultaneously. Great importance was attached to the “interoperability” of the system: the buses can be recharged both via pantograph and via plug-in.

The technology of an electric bus is simpler, but the staff – especially those at the depot – require better training. Quote: “Easy to buy, but harder to operate”.

At the event, Solaris described itself as a “pioneer in the field of alternative drives”. They proudly referred to their “emergency hotline”, which is available 24 hours a day, seven days a week. Quote: “We grow with the market.”

Solaris mentioned their fleet management system “eSConnecht”, which constantly informs them about how “the bus is feeling”. If it has a problem, the workshop can see what is wrong even before the driver issues an error message. Even more, they can see in advance where a problem might occur soon.

The availability of the Solaris electric buses is more than 90% everywhere. Three cities were mentioned as examples:

– The FVAG in Freiburg ordered two Urbino 12 electric buses in 2018, which entered service in 2020. These have since been running on one line between the terminus of two tram lines. Since then, they have covered 140,000 kilometres to the satisfaction of the company. At both terminal stops, the cars are recharged via pantograph, with the charging stations supplied with electricity from the tram’s network. The head of Freiburg’s FVAG reported that the concept of recharging from the tram network at a terminal stop was to be retained because of the simple connection to the power supply. Ten electric articulated buses are currently on order. The service life of the batteries and the further development of battery technology are eagerly awaited.    And the concluding statement of the FVAG boss: “The buses are reliable, drivers and passengers love our electric buses.”

– ATM Milano (Milan): More than 100 electric buses are now in operation here, after the company had already gained experience with an extensive trolleybus system in the past. The goal is to be completely emission-free by 2030.

The afternoon of the meeting was dedicated to the topic of “hydrogen buses” (Hydrogenbuses). Hydrogen buses are electric buses that produce their own traction current by electrolysis on board the bus.

The charm of hydrogen is that it is lightweight and gives the bus a long range. Hydrogen buses are particularly attractive if the hydrogen is produced in the local industry and can thus be used very cost-effectively. A prime example of this are the hydrogen buses used by Regionalverkehr Köln in the towns of Hürth and Brühl (in the Bergheim district). They refuel in the “Chempark Hürth”, where hydrogen is produced as a bi-product in the quite normal production process. Before the RVK hydrogen buses existed, this hydrogen, an energy carrier (!), was simply destroyed by flaring. What a waste!

Solaris started looking into hydrogen technology ten years ago. At present, the company offers the “Urbino 12 hydrogen”, of which 84 have already been sold. The largest customers are Regionalverkehr Köln with 15 and Wuppertaler WSW with ten cars, which are currently being delivered to both companies. Germany is currently a “good” country for hydrogen buses anyway, because as “market leader” in Europe it already has 99 hydrogen filling stations.

– Connexxion in the Netherlands

Hydrogen technology is not only suitable as a fuel for buses (instead of diesel), but also as a “range extender” for battery buses. For example, one kilogram of hydrogen is needed to generate, 33.3 kW of electricity, while, with one litre of diesel generates only 12.2 kW. The drive unit of a hydrogen bus also requires only a much smaller installation space than a diesel engine. Additionally, a fuel cell is expected to have a service life of more than 33,000 operating hours.

At the end of his “Solaris Talks”, the manufacturer drew the following conclusion:

– Accordingly, “the greatest danger is to work with the thinking and tools of the past.”

– Technological shocks – meaning unexpected new technical developments – will increase, as will ecological earthquakes. But: “Every shock, every earthquake, is an opportunity to look for new solutions for the future of mobility.”
.

Not only electric buses: