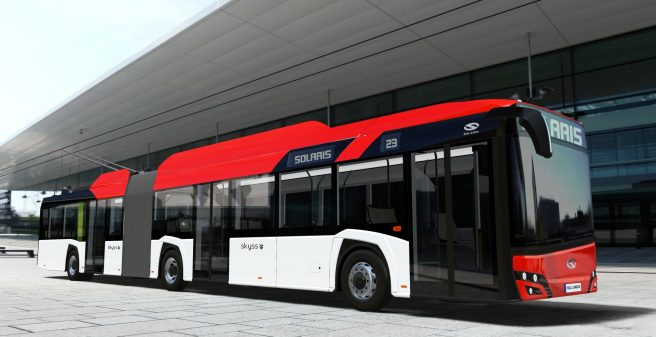 As part of a city-wide eletrification programme Norway’s only remaining trolleybus system in Bergen will be modernizied and extended. The single 7.5 km route will be extended by another 4.5 km using 3 km of new overhead and 1.5 km for service in abttery mode.

10 new articulated trolleybuses with traction batteries for off-wire operation had been tendered, and the new operator Keolis awarded the contract to Polish manufacturer Solaris Bus & Coach. The Trollino 18 articulated trolleybuses ordered by Keolis will be powered by 250 kW electric motors and will also be equipped with 55 kWh traction batteries, thanks to which it will be possible to cover a distance of over 11 kilometers without the need to connect to the catenary system. The batteries will be charged while driving the trolleybus using ‘in motion charging’ technology under the overhead.

Total investment is EUR 8 million, with deliveries of the Solaris Trollino 18 articulated trolleybuses commencing in September 2020 and the beginning of line operation is also scheduled for autumn 2020.

The trolleybuses ordered by Keolis Norge AS will have a built-in breathalyser to check the driver’s sobriety before starting the vehicle. They will also be equipped by the manufacturer with a special Scandinavian thermal insulation package, which improves the thermal comfort of passengers and reduces energy consumption in harsh Scandinavian atmospheric conditions. It includes, among others additional insulation of the side walls, the ceiling and the chassis in the area of the wheel arches, as well as double side windows. The vehicles will also be adapted to the use of snow chains.47 passenger seats will be inside the vehicles.

The new trolleybuses replace the remaining 6 Neoplan trolleybuses built in 2003 and now near the end of their useful operating life.