Solingen: New trolleybuses and line 683 back again to Burg 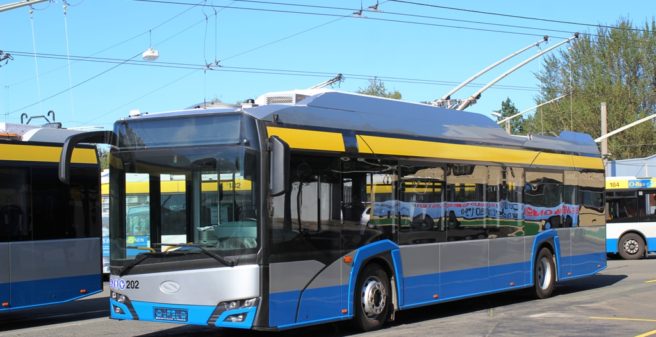 Recently delivered Trollino 12 battery-trolleybus no. 202 at the depot in Solingen | © Jürgen Lehmann

Since Monday, 25 October 2021, line 683 of the Solingen public utility company (SWS) has again been running continuously from the DB station Wuppertal-Vohwinkel to the “Burger Bahnhof” in the Solingen district Unterburg. The SWS Solaris Trollino 18.75 BOB are used on the route to Burg. The through service to Burg eliminates the need to change to diesel buses at the Krahenhöhe (intermediate) turning loop, which was necessary since 2017 due to construction works along the route.

Line 683 runs every 10 minutes to Krahenhöhe, the section to Burg station is served every half hour. Line 683 has a total of 11 vehicles, four of which run through to Burg, the other seven already terminate at Krahenhöhe.

The services to Burg use the newly delivered Solaris Trollino 18.75 BOB, while the services which terminate at Krahenhöhe mainly operate with the Hess BGT-N 2 C (“Swisstrolley”) articluated hybrid trolleybuses built in 2009. The Hess now only need their diesel generator sets – supplied by the the Trier-based manufacturer Kirsch – for the section of line 683 between Wuppertal’s Vohwinkel Schwebebahn (=suspension railway) station to the DB Vohwinkel railway station.

In September 2021, the first two of the 16 Solaris 12-metre battery trolleybuses ordered arrived in Solingen. Like the previously delivered articulated trolleybuses, they are also designed for longer trips off the overhead network and will thus contribute to the extensive electrification programme of the entire urban transport system. Locally, they are also referred to as BOB (“Batterie-Oberleitungs-Bus“ = battery trolleybus) in Solingen. A third vehicle arrived at the end of October. The new BOB are numbered 201-216, but are not yet in passenger service.