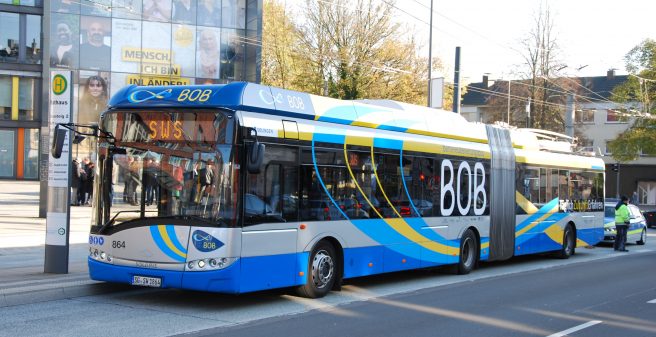 Solingen started its trolleybus services on 19 June 1952 – it was one of the last German cities to introduce this mode of transport. But unlike almost all other German cities that once used to have trolleybuses, Solingen kept them in operation, so the city today is a rare case and one of only three operators in the country.

Four generations of trolleybuses so far

The system was gradually extended to six routes since 1952. With regard to the fleet, the legendary Uerdingen ÜH III s with Henschel components were initially used – because of the Henschel components, the cars were also often referred to as “Henschel’s”, although it is a Uerdingen-design due to their self-supporting construction. Towards the end of the sixties, the second generation of the Solingen trolleybuses came into use, and they were truly unusual vehicles. There were 80 of them. The then head of the Stadtwerke Solingen, Dipl.-Ing. Meis, had designed the twelve-meter three-axle vehicles, and in doing so he had been inspired by the Italian “filobuses” of the thirties and forties. The cars were built on Krupp chassis – although the Essen-based manufacturer had already stopped building commercial vehicles at that time – and the bodywork was done by Gebrüder Ludewig in nearby Essen-Altenessen.  The electrical equipment was taken from the old Uerdingen vehicles to the new TS. Two of these TS are preserved today by the association Obus-Museum Solingen e.V., see also our report on: https://hosting129892.a2e10.netcup.net/en/return-of-another-ts-trolleybus-to-solingen/

As a third trolleybus generation, Solingen received buses from MAN, once again with a unique three-axle special design for the city

With the fourth trolleybus generation, the operator Stadtwerke Solingen (SWS) switched the fleet into 18-metre-long articulated buses only. And the vehicles were not so “exotic” anymore: In 2001, Dutch manufacturer Berkhof (now incorporated in VDL) supplied its “Premier AT 18″ model and a year later 20 trolleybuses arrived from Belgium: “Van Hool AG 300 T”. 2009 saw the addition of 15 articulated Hess “BGT-N 2 C” built in Switzerland. They have additional diesel engines for off-wire operation on route 683.

Early 2018, SWS introduced the first kind of a completely new type of trolleybuses (operating numbers 861 to 864). A total of four “Trollino 18.75” articulated buses were purchased from Polish manufacturer Solaris Bus and Coach. They use the so called “In-Motion-Charging” (IMC) of Kiepe Electric GmbH, which allows for extensive off-wire operations using their traction batteries. The batteries are recharged while using existing catenary stretches of the route. Solingen has found a striking name for these buses: “BOB” – Batterie-Oberleitungs-Bus, literally “battery-overhead bus”.

Initially, the new Trollinos went into operation on the existing trolleybus lines 681 to 686. In doing so SWS was able to gain experiences with the new IMC system. From the beginning, however, the vehicles were foreseen for line 695 which will be converted in due course from traditional diesel bus operations to the”BOB”. While being tested on the other lines preparatory work for the conversion of route 695 took place, mainly on the terminus “Abteiweg” in Gräfrath.

On the last day of October, the time had come: Line 695 started BOB operations. Two of the Solaris “BOB” were waiting at the Abteiweg for the public and the press

It is especially remarkable that the new BOB route 695 between Meigen and Abteilweg has only a 30% share of overhead operation, while the remainder of the route is being operated by the BOB in battery mode. In concrete terms: Between Abteiweg and Unionstraße the buses run with the electricity from their batteries, from Unionstraße to the Clemenskirche however it uses the overhead line of the parallel trolleybus line 683, and from Clemenskirche to Meigen it uses the batteries once again.

SWS installed a traction pole at the Abteiweg terminus, which provides the opportunity to recharge the buses if necessary, something which was not planned for originally.

In the coming years, Stadtwerke Solingen plans to convert its entire bus fleet to “BOB” operations. In the future, there will be no need in the city anymore for pure diesel buses or for pure trolleybuses. And because of the fact, that the BOB can cover the greater part of the city’s routes without an overhead power supply, it is even considered to dismantle parts of the overhead network in the inner city area.