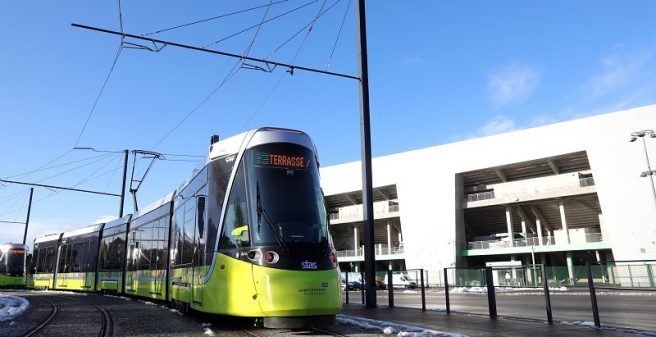 St. Étienne operates the oldest tramway system in France and was one of out three which survived the wide-scale tram closure and bus conversion policy of the 1950s and 1960s. The only surviving route 4 was gradually extended again in 1983 and 1991 and a second line added in 2006. Now St. Etienne’s operator STAS made another important step forward: On 16 November further 4.2 km of new tracks were inaugurated between Châteauxcreux Gare and Roger Rocher Allex les Verts where it connects again with northbound route T1 (former route 4). Tram line T3 which previously operated only between Châteauxcreux Gare and Bellevue is now extended via Technopôle Christian Cabal to Terrasse and during peak hours further north to Hôpital Nord, on joint track with route T1. Of the new 4.2 km of tram route, approximately 1.2 km are grass-covered. A network scheme can be found here:

16 new tramways have been supplied by Spanish CAF group during 2017 and 2018. Those are five-module units are 100% low floor throughout, 32.9 m long, but only 2.15m wide, as required by the configuration of the meter-gauge network in St.Étienne. They operate along 35 older trams, supplied by Vevey and Alstom between 1991 and 1998.