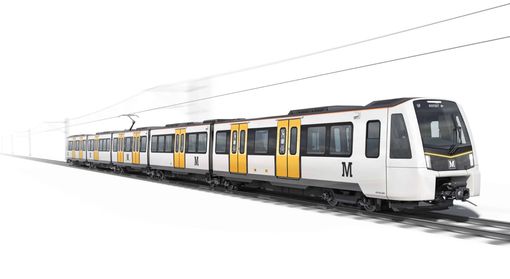 Nexus has announced that it will award Stadler the contract to deliver 42 METRO trains. The trains will be used on the Tyne and Wear Metro network in the North East of England. The objection period began with the notification to the unsuccessful bidders CAF and Hitachi Rail Europe that Stadler had been awarded the contract. The transport authority, Nexus based in Newcastle upon Tyne, UK, intends to sign a contract with Stadler for the delivery of 42 METRO trains, including an option for more trains. Stadler will also receive the contract for the comprehensive maintenance of the Tyne and Wear Metro fleet for up to 35 years. The value of the contract for the supply of the vehicles, the construction of a new depot and maintenance is around £700 million (ca. 827 million Euro).

The vehicles are five-car articulated trains which will entirely the current rolling stock which is over 38 years old already. According to local media reports, the delivery of the new trains will start in 2022 and end in 2024.

The ten-day objection period began with the award of the contract. The unsuccessful bidders have the opportunity to appeal against this decision. Only after this period can the contracts be legally signed.

The Newcastle Metro, called Tyne & Wear Metro has been inaugurated in 1980 as one of the first modern light rail / metro systems in the UK. The system was partly built on former railway lines and connects Newcastle, Gateshead, Sunderland, South Shields, Tynemouth and Whitley Bay. The 74.5 km long route network, which consists of two long lines, is operated with a total of 90 six-axle vehicles. The high-floor vehicles, which are similar to the German DUEWAG B-type light rail vehicle, were built by Metro-Cammell in Birmingham between 1975 and 1981 and are operated with 1500 V DC overhead lines.

Further information and a map of the Tyne & Wear Metro can be found here:http://www.urbanrail.net/eu/uk/new/newcstle.htm