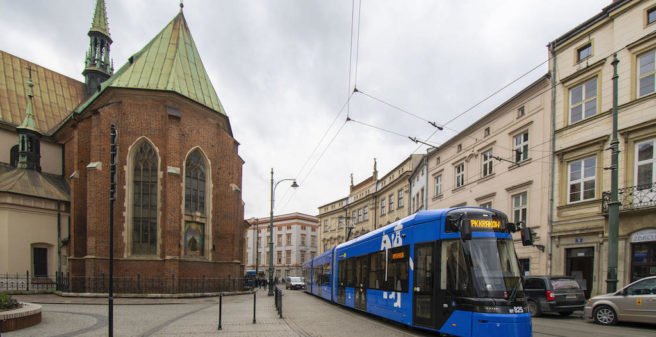 The first Stadler Tango Lajkonik was delivered to Kraków in December 2019 - now a further 60 trams have been ordered I © Stadler
Another win for Stadler in Poland: MPK Kraków, the city of Cracow’s public transport provider, has ordered additional low-floor trams from Stadler. For that purpose, a framework agreement for the delivery of up to 60 new trams has been signed. In order to comply with the health and safety measures during the Corona crisis, the contract has been signed electronically between MPK and Stadler.
Combined with the previous order from January 2018, Stadler will now deliver a total of up to 110 vehicles to Cracow. Stadler is currently delivering a first series of Tango Lajkonik trams to Kraków. The first vehicle had been delivered in December 2019. We reported here:

As there is still over 70 Konstal 105Na trams from the 1980’s and 1990’s as well as 70 of former Vienna E1 trams with c3 trailer cars produced between 1966 and 1976 in service, the transport operator and the city are urged to replace the aging rolling stock as quick as possible.

Following the positive rating of the offer from Stadler, a framework agreement for the delivery of 60 TANGO Kraków Lajkonik II trams and two implementation contracts for the delivery of 10 and 25 vehicles were signed today. The value of the framework contract is approximately 120 million Swiss francs. Delivery of the vehicles is expected to take place in mid-2023. MPK Kraków had received the proposal from Stadler in September 2019 which was the only offer in this process.

The ordered trams will be a continuation of the TANGO Kraków Lajkonik series which is currently being produced. These trams are low-floor, three-part vehicles with four bogies. The entrance are 1.40 meters wide and ensure a fast passenger exchange. The vehicle front is designed to protect pedestrians. The new trams offer more low floor space as well as more room for people in wheelchairs. Special backrests for standing room are a new solution. With 75 seats and 163 standing places, the trams provide enough space for up to 238 passengers at the same time. The vehicles will be equipped with air conditioning, a ticket vending machine, a passenger information system, a monitoring system, USB connections for charging smartphones and a passenger counting system. The ergonomic cabin and the comfortable armchair ensure convenient working conditions for drivers.

The trams for Cracow are environmentally friendly thanks to a recuperation system which enables brake energy to be reused. In addition, two trams will be equipped for operation without an external power supply, while the others will be prepared for the future use of this solution.