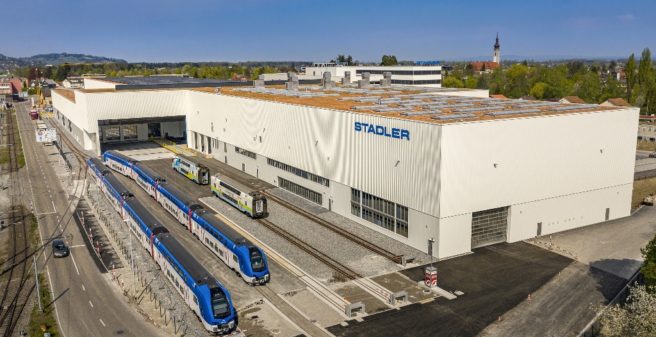 The new factory in St. Margrethen, Switzerland, on the border with Austria, which opened just over a year ago | © Stadler Rail AG

When Peter Spuhler took over the factory in Bussnang in eastern Switzerland from Ernst Stadler’s widow in 1989, it was a small enterprise with 18 employees. In the meantime, he has systematically built up the company to become a name on the world market and number 2 in Europe in the market for rail vehicles (excluding freight wagons and high-speed trains). More than 8500 Stadler trains and locomotives are now in operation in 43 countries. Stadler recorded an average annual growth rate (CAGR) of 11% over the past decade.

The company has now reported its results for the past year 2020. In 2020, 465 vehicles were delivered and 549 ordered. Stadler makes more than three quarters of its sales in Western Europe, of which more than half are in Switzerland, Germany and Austria. Over 12 300 employees, of which more than 1700 are in engineering, work in the 12 plants, about half of which are in high-wage countries. The product portfolio covers the entire range of rolling stock except freight wagons and high-speed trains over 251 km/h, and includes in particular the development and manufacture of special designs such as rack-and-pinion trains. In Europe, Stadler is currently No. 2 in trams and multiple units, with a market share of 16% and 22% respectively, and an important supplier of metro trains. The service business and signalling and control technology for mainline and metro trains are currently being developed.

The Corona crisis slowed Stadler down severely, especially in the first half of 2020. With only 3.6 per cent less than in the record year 2019, it caught up in the second half of the year and still achieved a turnover of 3.08 billion Swiss francs last year. In the first half of the year, there were interruptions in the supply chains due to the pandemic. In addition, due to regulatory requirements, individual plants were either temporarily closed or had to temporarily reduce their production capacity and there were travel restrictions for employees, which delayed test runs, vehicle acceptance and approvals. As a result, payments for milestones and final payments from customers were postponed. In addition, the thinning of public transport schedules by up to 90% in the first half of the year caused revenues in the service business, which depend on kilometres travelled, to plummet. Overall, the operating profit before taxes (EBIT) decreased by 19 % to 156.1 million Swiss francs, while the net profit nevertheless increased by 7.7 % to 138.4 million Swiss francs due to various financial effects. In the current year, the group aims at making up the shortfall and forecasts the delivery of more than 500 trains, trams and locomotives and sales of between 3.5 and 3.8 billion Swiss francs, as well as winning orders of between 4 and 5 billion.

After Kawasaki and Nippon Sharyo withdrew from the USA, Stadler expects to expand its market position in this country in the future. In Asia Stadler hopes to improve its market position in the future. 34 locomotives have been ordered by Taiwan. After failing to set up its own factory in India, Stadler entered into a joint venture with the Indonesian rail vehicle manufacturer PT Inka. A prerequisite for the commissioning of a joint factory in Indonesia is the order of commuter rail cars from Indonesia.

In 2020, important tenders were postponed, such as the decision of the Spanish state railway Renfe to award the contract for 59 double-decker short-distance trains worth 1.1 billion Swiss francs, which will be manufactured at the Valencia plant and maintained by Stadler for 15 years. The contract should have been awarded in 2020 and includes an option for 44 more trains. Stadler is developing its first hydrogen train for the rail operator of San Bernardino County in California. The Schleswig-Holstein local transport association in northern Germany ordered 55 battery trains after Stadler emerged as the winner of Germany’s first green technology tender. In addition to the joint project with the Austrian Zillertalbahn, another hydrogen concept for the European market is in the pipeline. In terms of special vehicles for regional transport, orders were received from the Matterhorn-Gotthard-Bahn (MGB) for 12 of 27 new “ORION” trains at a cost of approximately 150 million Swiss francs. The Rhaetian Railway (RhB) redeemed options for 20 “Capricorn” trains worth CHF 170 million and the Centovalli Railway ordered 8 trains.

Major orders are expected to come from Switzerland in 2021 or 2022. Last May, SBB and the regional railways Thurbo and Regionalps put out to tender an order for 194 single-deck commuter trains. The railway companies expect a maximum order volume of 1.5 billion Swiss francs. In addition, there are options for 316 vehicles. In the second round of tendering now underway, Alstom, Siemens and Stadler are invited to submit their bids by mid-2021, with the contract to be awarded in 2022.

Stadler has taken a leap forward by developing a new, very compact running gear for low-floor trams and abandoning old technologies. The increasing demand in the field of urban transport was the reason to think about the requirements of transport operators with today’s technologies and to identify and address gaps in the portfolio. The result is a new generation of vehicles under the collective name “TINA”, the core of which is the compact and very flexible running gear. LRV product development, based at the main factory in Bussnang, started first and foremost by thinking of passenger needs and oriented the technology of the bogie towards an optimal interior with maximum comfort, generous passageways for optimal passenger flow and, depending on the customer’s wishes, also completely barrier-free solutions. The innovative bogie is suitable for all common gauges from metre gauge to broad gauge. Since it does not matter whether it is designed as a conventional pivoting bogie or turning around together with the carbody and whether it is a motor or trailer running gear, its application under a variety of vehicle concepts is possible.

The customer can choose between conventional axles and loose wheels and does not have to do without large wheels that are gentle to the track. Identical components are used for all variants, thus achieving a high degree of flexibility with a high degree of standardisation. In the year under review, an order for 14 five-part low-floor bogie vehicles was booked for HEAG in Darmstadt, Germany, and in March 2021, the Swiss Baselland Transport BLT ordered 25 seven-part trams in the same configuration as the existing Tango trams from Stadler, but with complete accessibility from the first to the last passenger door. Further trams have been ordered by Milan and Jena, among others.

In terms of metro vehicles, an order from Nexus for 42 metro trains for the Tyne & Wear Metro with a new maintenance facility and 35 years of maintenance came from the United Kingdom for a total of around 700 million British pounds, while Berlin’s public transport authority awarded Stadler the supply of up to 1,500 metro cars with spare parts supply over a period of 32 years in a framework agreement worth up to three billion euros. Stadler will equip the 127 METRO trains in the contract signed with the Metropolitan Atlanta Rapid Transit Authority (MARTA) in 2019 with Stadler’s newly developed CBTC system, allowing it to use its in-house train control system in a metro project for the first time.