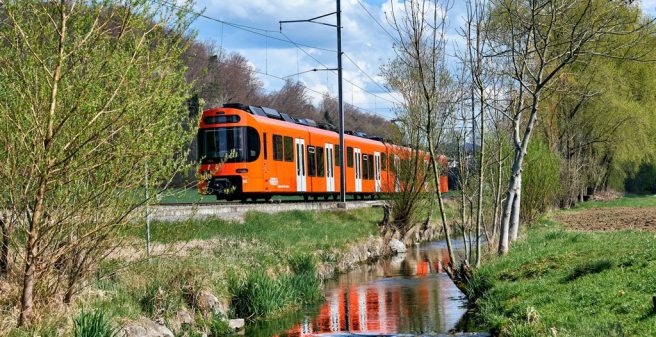 The new commuter train for the RBS lines in Bern was named after the river Worbla, which flows along the line S7 of the RBS I Photo: RBS

In the beginning of 2019, Stadler delivered the first new “Worbla” low-floor commuter train to Bern-Solothurn regional transport (RBS). The RBS operates four meter-gauge commuter lines in and around the Swiss capital Bern. Six of the 14 new trains are now in operation on the most heavily used Line S7 of the Bern S-Bahn system. Next year, the series delivery will be completed with the so-called “Mandarinli” from 1970’s to be replaced.

It now pays off that the RBS had previously asked its passengers for ideas regarding the vehicle layout, resulting in a catalogue of over 700 suggestions for improvement on the new trains. A survey of RBS passengers now reveals a very positive sentiment, with 87% of RBS passengers saying that they feel comfortable or at ease in the “Worbla” trains. 80% of the participants stated that they perceive a noticeable improvement when entering and exiting the low-floor entrances to all doors. Compared to the predecessor vehicles, the seat distance was increased to the delight of RBS passengers.

In the “Worbla” trains, the eight 1400 mm wide doors (per side) are evenly distributed over the 60 m train length. The trains have a total of 130 seats and 380 places for standees. In combination with the spacious and multifunctional areas near all the doors and a central vertical bar in the entrances, the trains allow for a good passenger flow by separating the passengers entering and exiting. The dwell times at the stations have been reduced to only 20 seconds.

The manufacturer Stadler emphasizes that it makes 15% of its turnover with tailor-made trains such as the Worbla which has been presented at the InnoTrans fair in Berlin in September 2018 for the first time. The tailor-made trains allow the Swiss-German manufacturer to keep up with innovations. In addition to the consideration of the specific customer ideas, the challenge in this case was to produce a 2650 mm wide meter gauge low floor high performance train for a 1250 V non-standard catenary line and with an entry height of not more than 400 mm.

Technical data of the “Worbla”: