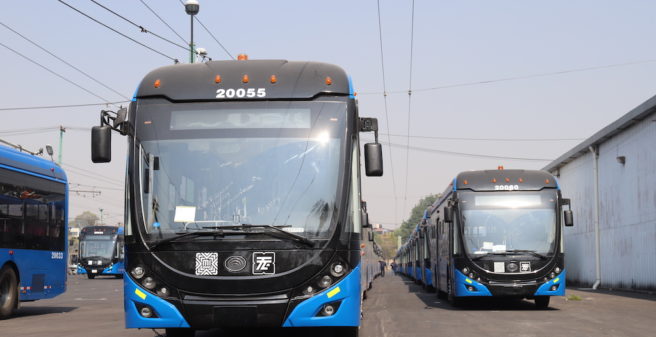 Since decades, Mexico City with its’ over 20 million inhabitants in the entire metropolis is known for its’ high pollution levels. The need for emission-free public transport is urgent. The city’s trolleybus system which has been widely neglected for decades, has now been rediscovered by the newly elected city government. The new city government and the operator STE (Servicio de Transportes Eléctricos) have now launched a massive modernisation programme. Investments into the 203 km long trolleybus network have now started. The average age of the fleet is 28 years. The oldest vehicles date from 1975, the youngest vehicles from 1999. Currently, only 140 out of 339 trolleybuses are operational with a negative impact on operational quality and passenger capacity. Since the new city government with the new mayor Claudia Sheinbaum has taken office in December 2018, a large-scale investment program has been started. A total of 63 low-floor Yutong trolleybuses have been procured by STE (Servicio de Transportes Eléctricos) and the first vehicles have already entered operation.

For the trolleybus, a tender for 30 new trolleybuses which has later been altered to 40 trolleybus, has been released in the beginning of 2019. In May 2019, Yutong has been selected as a supplier for trolleybuses. The total contract value is reported to be 290 million MEX (ca. 13.4 million EUR or ca. 334,000 EUR per trolleybus). A further 23 Yutong trolleybuses have been procured later. These vehicles arrived in Mexico in December 2019 and have been publicly presented on 28 December 2019 by STE and city officials.

The new trolleybuses have a length of 12 m a capacity for 84 – 90 passengers of which 62 standing and 28 seating. A total of 13 seats has been reserved for female passengers and are therefore painted in pink. Furthermore, there are five blue seats which are reserved for elderly people. The maximum speed of the new trolleybuses is 70 km/h. Additionally, the new vehicles have been equipped with Lithium-Phosphate batteries, allowing for a catenary-free battery range of 100 km, equalling three times the entire length of the “zero emission” trolleybus route 1 (formerly line A) from North to South. The first new trolleybuses arrived in Mexico City in autumn 2019. Trial operation of the new trolleybuses began in November 2019 on several trolleybus lines. After the trial phase, the trolleybuses will uniquely be operated on the north-south trunk line 1, called „Corrdedor Zero Emisiones“.

In order to accelerate the urgent fleet renewal on the one hand and to enlarge the operational fleet on the other hand, another 450 trolleybuses are planned to be procured in the upcoming five years. UTM will soon publish an exclusive interview with STE Managing Director Guillermo Calderón Aguilera about the details of STE’s plans.