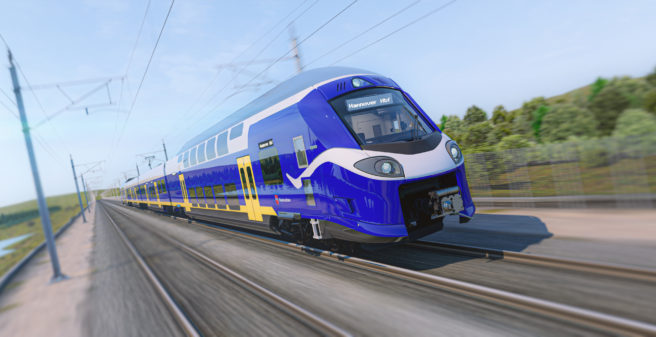 Lower Saxony is to receive a total of 34 new electric double-decker multiple-unit trains for the so-called Expresskreuz Bremen/Niedersachsen (EBN), which connects Bremen, Hanover, Oldenburg, Wilhelmshaven, Norddeich-Mole, Osnabrück and Bremerhaven. The Landesnahverkehrsgesellschaft Niedersachsen (LNVG) intends to award the contract, which totals around 760 million euros, to the Alstom Group. The trains are scheduled to be in service from December 2024.

The trains are being financed with 420 million from the Ministry of Economic Affairs for local rail transport. local rail passenger transport (SPNV). Lower Saxony’s Minister of Transport Dr. Bernd Althusmann: “Lower Saxony has never ordered so many new trains in one go. ordered in one fell swoop. This investment from the state’s funds sends a clear signal: We want to further strengthen rail transport. We are committed to modern barrier-free mobility and climate protection.” Since 1997, Lower Saxony has had a state-owned pool for local rail transport with 385 vehicles in the meantime. vehicles. With an investment volume of around one billion euros, it is the largest pool among the federal states. “In this way we are strengthening competition and and ensure high-quality transport services on Lower Saxony’s rails,” said Althusmann. rails,” says Althusmann.

The 34 new double-decker trains consist of four vehicle units – two driving trailers and two middle cars each. In addition, 18 more centre cars will be ordered to extend the trains to up to six units, depending on passenger volume. In total, 154 vehicle units (68 driving trailers and 86 middle cars) will be procured. The exterior design is based on the Alstom Coradia Stream regional multiple units, of which Alstom currently supplies 216 trains to Italy and a total of 99 to the Netherlands. The variant for Lower Saxony is the first double-deck variant of the Coradia for Alstom. So far, Alstom has only developed TGV high-speed double-deck trains and TER double-deck trains for SNCF in France.

Althusmann: “The contract for the construction and maintenance of the vehicles, which was put out to tender by the LNVG in a strict competitive procedure, is to go to the company Alstom. This means that the procurement of the trains is not only good news for passengers, mobility and the climate in Lower Saxony, but also for our industrial location and the employees at the Salzgitter site.”

The most silent trains in Germany

Passengers can look forward to more comfort: For the first time in Lower Saxony and Bremen, double-decker multiple-unit trains will have step-free and will have barrier-free access. Carmen Schwabl, spokeswoman Carmen Schwabl, spokeswoman for the LNVG management, mentions another innovation. to develop the quietest regional trains in Germany for us. The low noise of the vehicles will set new standards.”

In the overall package to be awarded, which has a volume of more than 760 million euros, also includes the maintenance of the vehicles for 30 years and the construction of a new workshop. from additional LNVG funds. The Bremen/Lower Saxony express interchange includes the two-hourly lines RE 1 Hanover-Bremen-Oldenburg-Norddeich Mole; RE 1 Hanover-Bremen-Oldenburg-Wilhelmshaven and RE 8 Bremerhaven-Bremen-Hanover. The RE 1 and RE 8 lines complement each other between Hanover and Bremen at hourly every hour. The RE 9 line Bremerhaven-Bremen-Osnabrück runs between Osnabrück and Bremen and is extended to Bremerhaven every two hours. every two hours. Here it is supplemented with the RE 8 line to an hourly frequency. In addition, there will be individual amplified services between Hanover and Bremen.

LNVG Managing Director Schwabl: “The new trains can be coupled and uncoupled very quickly. Therefore we can split the RE 1 from Hanover in Oldenburg in future. One part continues to Norddeich-Mole, one part to Wilhelmshaven.” In the opposite direction both train sections will be coupled together in Oldenburg. Schwabl: “After a long regular two-hourly direct connection between Wilhelmshaven and Hanover. between Wilhelmshaven and Hanover. The Bremen/Lower Saxony express intersection even more attractive for passengers.” Minister Althusmann particularly emphasises the improvements for the coastal region: “The North Sea coast is one of the premium one of the premium destinations in tourism. The new comfortable and in barrier-free trains and the direct connection from Hanover to Wilhelmshaven mean a Wilhelmshaven represent a quantum leap for the accessibility of the region and for tourist and for tourism guests from all over Germany.

The LNVG has set the manufacturer high standards. These include, among other things, areas for mobility-impaired people, comfortable seat spacing, generous multi-purpose areas and bicycle areas that can be enlarged or reduced depending on the season, and high as well as high capacities for luggage. On the upper level there is more usable space for passengers, because the trains are being built according to new European for the external dimensions, the so-called DE 3 loading gauge.

Schwabl: “The EBN vehicles will be the first new vehicles in Germany to fully utilise the fully utilise the DE3 European loading gauge.” This results in more head more headroom and shoulder room in the upper deck. This is a significant improvement for the passengers.

The EBN vehicles have WLAN and video surveillance. Great value is placed on passenger information. Displays on the outside of the train will show how many free seats there are in each carriage. Passengers will also be able to access this data before starting their journey via an app. In addition, there will be dynamic displays for passenger information with the train’s route, real-time information and connections at the en-route stations.

In 2024 initially 33 new multiple-unit trains will be launched. There will be 15 to 20 per cent more seats on the RE 8 and RE 9 lines. LNVG Managing Director Schwabl: “We also want to increase the number of seats on the high-demand RE 1 line between Hanover and Oldenburg.” It is expected that from 2028 onwards additional cars for the network will be delivered. Compared to today, the number of seats on the RE1 line will then be about a quarter higher. It won’t be any faster, because before platforms on the line will have to be extended and signals adapted. A 34th double-decker train is initially available for the manufacturer to test theEuropean Train Control System (ETCS), which will be introduced in the coming years.

The workshop, Alstom is building will be a state-of-the-art facility, especially in terms of environmental protection and energy efficiency. The LNVG has also laid down particularly strict specifications for noise protection. Work involving noise may only take place in the workshop hall. only take place in the workshop hall. Shunting is not done with a diesel locomotive, but with an electrically driven shunting device. The track systems be constructed in such a way that the squeaking of curves is avoided. squeaking around curves. The selection of the land was also the responsibility of Alstom. The company chose a site in Bremen. The plans for the site in the Inlandshafen/Reitbrake area will be examined by the Bremen authorities.

The award to Alstom will take effect if no unsuccessful bidder challenges the decision by 8 March 2021.