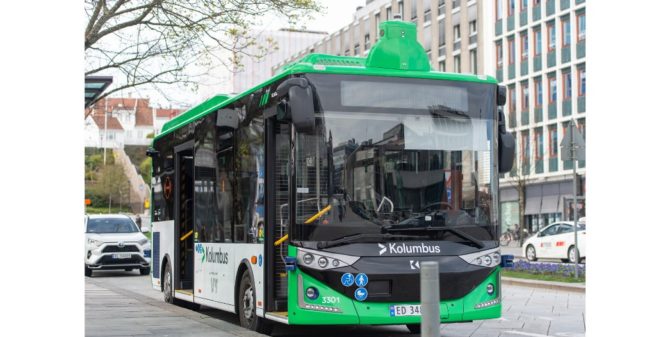 Karsan, a bus manufacturer with a plant in Bursa, Turkey, has defined its goal: “one step ahead in the future of mobility”. In fact, the company is one of the pioneers in the field of the “bus of the future”. Karsan presented its two midibuses “Jest” and “ATAK” as battery buses relatively early on; as such, they are called “e-Jest” and “e-ATAK” and feature the electric drive system from BMW that the Bavarian company installs in its passenger cars. Since mid-2021, Karsan now also offers “full-grown” buses with electric drive. They are called “e-ATA” and are available in lengths of 10, 12 and 18 metres, i.e. as “e-ATA 10”, as “e-ATA 12” and as “e-ATA 18”. At the Bus2Bus trade fair in Berlin at the end of April, an “e-ATA 12” was available as a demonstration vehicle, and it certainly impressed on demonstration runs. It was particularly impressive how quiet it was on the road – the VDV (Association of German Transport Companies) even thinks that electric buses are too quiet, which is why they have to draw attention to themselves with a special sound. So that blind people, for example, even notice that an electric bus is approaching, so that they don’t run in front of the bus and get run over.

Let’s return to Karsan’s pioneering role in bus construction. They are far ahead in the field of autonomous driving. At the end of 2020, the electric e-ATAK was also presented as an autonomous bus, i.e. one that drives without a driver. In times of the pandemic, this was done on the internet, the demonstration drive replaced a video. But it was impressive to see the bus travelling on its own, the steering wheel turning, although no one was sitting in the driver’s seat … Which brings us to a characteristic of the autonomous e-ATAK that clearly distinguishes it from other, smaller autonomous buses like the EasyMile EZ 10, the Navya Arma and the Hamburg HEAT: the autonomous e-ATAK has a driver’s seat, a driver could take over at any time, and not only with the help of a console …

The bus as such comes from Karsan. Its equipment for autonomous driving (hardware and above all software) is supplied by the Californian company ADASTEC. Karsan is already talking about “Level 4” of autonomous driving. Sensors at the four “corners” of the car, in the front and on the roof above the target sign box let the bus recognise the traffic situation, cars, traffic lights, traffic signs, cyclists, pedestrians and everything else that is on the road or next to the lane and, above all, react correctly to it. And of course, the bus must also know its route so that it makes the right turn at the right intersection …

One such Karsan autonomous e-ATAK has now been delivered to the Norwegian city of Stavanger, where it is now being used in the city’s scheduled service. Its presentation took place at the Nedre Strandgate stop in the city centre. Not only the Norwegian Minister of Transport Jon-Ivar Nygård, Karsan CEO Okan Bas and ADASTEC CEO Ali Ufuk Peker were present, but also the head of Stavanger’s bus operator “Kolumbus” as well as the head of the Scandinavian “Vy-Buss” group. After the opening ceremony, the autonomous e-ATAK took the guests on a demonstration ride all by itself to the city’s concert hall.

Stavanger’s “Karsan autonomous e-ATAK” carries the car number 3301 at Kolumbus and is now in service on a line in Stavanger’s city centre.