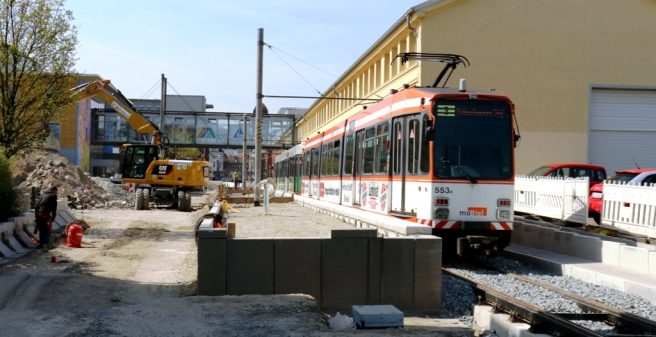 For decades, the Bielefeld tram network consisted in three tram lines which are using a 4 km long tunnel section underneath the city center since 1991. Since then, the system has been marketed as a light rail system and is today the only German meter-gauge operator that relies on barrier-free access via elevated platforms. In realty, only about two thirds of the stops are equipped with such elevated platforms. Their integration into the cityscape is not always easy to implement due to space, traffic or even visual restrictions. Many people have been complaining about the roughly 1 meter high platforms in the middle of a street, especially in urban zones. Since 1999 Bielefeld inaugurated a fourth “Stadtbahn” line which connects the city center with the university as a radial line. Since 2001 it has been extended to the residential area of Lohmannshof in the western district of Dornberg.

This line 4 also uses the city tunnel and terminates immediately at the southern exit of the tunnel at the station city hall. It uses a track in the middle of the street which was originally intended to be used as a siding in case of disruptions. In order to relieve the congestion this line section and to enable an increase of train frequency, the operator has been looking for additional terminus possibilities near the city center. A suitable site has been found as an extension of line 4 in a urban renewal area on the former factory premises of the Dürkopp company. In recent years, cultural institutions and residential development have settled next to a small park. The line 4 will connect this area very well, but residents claims had delayed the construction quite some time again and again. The new infrastructure has actually only a length of about 250 meters. The line starts from the town hall, using the approximately 400 meters in the course of Nikolaus-Dürkopp-Straße to today’s stop August-Schröder-Straße of line 3 and then bifurcates to the former Dürkopp terrain. The tracks will be laid out flush with the street. At the future terminus “Gate 6” an elevated platform with glass roofing and direct access to the adjacent parks will be created.

Currently, the tracks of line 3 are being modernised. The former stop August-Schröder-Straße will be omitted and it will be merged with the following stop Ravensberger Straße within a new elevated platform next to the new branch of line 4. Later, a new high platform will also be added to the hospital station. With the narrow street cross section in this area, the arrangement of the platforms represents a special challenge. During the construction work, line 3 is replaced by buses since April 15 until autumn 2019 and the trains of the shortened line 3 are using the new branch of line 4 although the platforms and facilities of the new terminal Dürkopp Tor 6 are not yet completed. At the same time, the line will be prepared for the operation of the latest generation of moBiel rolling stock, the Heiterblick-built “Vamos” which are 2.65 m wide in the upper part in comparison to the 2.3 m wide M-type trams from the 1980’s and 1990’s. 16 of these trains are already in service since 2012. A further batch of 24 trains has been ordered in 2017 in order to replace the older M8C-type trams from the 1980’s.

Further extension plans to extend the 36,9 km network exist. However, plans to build an 8 km extension of line 4 from the city center to the western district of Heepen have been cancelled after a negative public referendum two years ago. Further to this, plans to extend line 4 on the other end from Lohmannshof to Dürerstraße via a new university campus by 1.3 km are currently being prepared. Also an 8 km extension of line 1 from Senne to Sennestadt in the southwestern outskirts is being planned.

A map is available by: