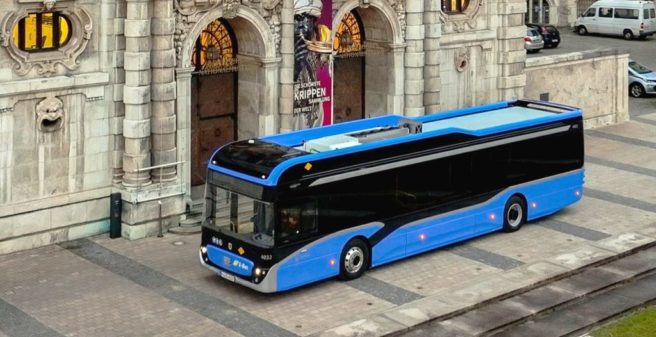 In 2012, a new bus manufacturer was founded in the Dutch city of Deurne (Greater Eindhoven area), which concentrated its activities entirely in the construction of electric buses from the very beginning. The step seemed to be brave: a completely new manufacturer, which on top of that appeared exclusively with a completely new drive concept … In 2012 there were still well-known bus manufacturers who thought that there was no need for something like battery buses.

But at Ebusco did the opposite. As early as 2013, the first demonstration vehicle was handed over to Bonn‘s SWB. It was of the very first model appropriately branded „1.0“. The body was provided by the Chinese company Golden Dragon. The ebus performed not too bad, however, the SWB considered the range somewhat unsatisfactory.

The first generation of the electric bus from Deurne (1.0) was followed by the second (Ebusco 2.0 or Ebusco 2.2), which – in the later version – is still on offer today. The range of the buses made significant progress, 350 kilometres is the figure communicated by Ebusco. That is actually enough for just about every route that a public transport company has to serve, from leaving the depot at 3.30 in the morning to returning at 3.00 the next day.

In October 2019, Ebusco presented its latest generation of electric buses at its Deurne factory. The prototype of the Ebusco 3.0 was shown – with considerable changes in the the way to build it. The body of the bus no longer consists of a steel frame with metal planking, as has been customary up to now, but of composite plastic. This reduces the unladen weight of the bus not inconsiderably, namely by about 33 % compared to a conventional bus. Its unladen weight is only 8,530 kg. And if the vehicle has to “lug” less of its own weight around, it consumes less energy – and therefore achieves a greater range with the electricity stored in the batteries. Ebusco states a range of up to 575 kilometres for its “3.0”. Accordingly, recharging during daily use on the line is absolutely not necessary; over-night charging at the depot during the nightly shutdown is perfectly sufficient.

Since plastic does not rust, Ebusco expects the 3.0 ebus to reach a service life of approximately 25 years. In addition, the composite body reduces the maintenance costs of the bus.

The Ebusco 3.0 has a completely flat floor. An at least partially glazed roof is possible because the buses‘ batteries have their place underneath the floor. This gives the buses a low centre of gravity, they do not interfere with the interior at all, and there is plenty of space for many batteries.

The two new Ebusco 3.0 trolleys of the MVG will be used on Munich’s Line 100. This is something similar to Berlin’s Line 100: it connects important tourist destinations in the city centre and is therefore particularly attractive for visitors to the city. And all this emission-free, smoothly, and quietly. We reported on other Ebusco models in Munich here: https://www.urban-transport-magazine.com/en/munich-eight-brand-new-ebusco-2-2/

Ebusco has recently become an “NV” (naamloze vennootschap – literally translated: nameless cooperative – a public limited company. Investors will be pleased: in the very first days of the stock exchange listing, the Ebusco share increased in value on the stock market.

The two new ebuses for Munich are not the only success Ebusco has recently achieved in the German market. A few days ago, the electric bus manufacturer from Deurne in the Netherlands announced that it had received its first order for electric articulated buses from Germany. The public transport operator of the Bavarian city of Fürth, “infra Fürth”, has ordered three 18-metre-long articulated buses of the Ebusco model 2.2, which are to be delivered in the course of 2022.

UTM already reported a few days ago that the Berlin BVG wants to start using 90 Ebusco 2.2. (https://www.urban-transport-magazine.com/en/ebusco-erhaelt-auftrag-ueber-90-busse-fuer-die-bvg-berlin/ ). The decisive factor for the Berliners’ decision was the positive feedback they received from other companies that already use Ebusco. For example (in alphabetical order of location) SWB in Bonn, Transdev in Frankfurt and both MVG and RVO in Munich and Bad Tölz respectively.

And “Wartburgmobil”, the public transport company from the region around Eisenach, has had two 12-metre-long Ebusco electric buses of the type 2.2 in operation for a good year. So they have more than “initial experience” with the vehicles. And Wartburgmobil recently reported to Deurne that they are very satisfied with the two vehicles.

Let’s go back to Munich and the MVG. On 12 January 2022, Ebusco announced that it had already received the next order from the Bavarian capital. This time it is for 14 articulated buses of the type Ebusco 2.2 with a length of 18 metres, which are to be delivered in the first half of next year. MVG had chosen the articulated bus from Deurne because of the “superior capacity of the batteries” (quote) and the low power consumption, which together resulted in a very economical offer. In this context, Veit Bodenschatz, managing director and head of bus operations at MVG, emphasised that the Ebusco used in Munich so far had fully met expectations in terms of their range.