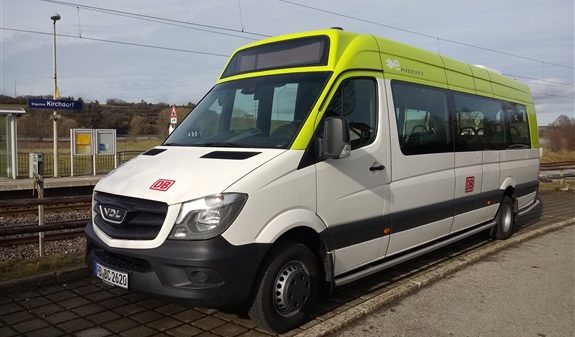 Since 6 February until 21 February 2021, “Südbadenbus” (SBG), a subsidiary of DB Regio Bus, is a battery-electric minibus called “MidCity electric” and supplied by Dutch manufacturer VDL. The bus is operating local services within the municipality of Brigachtal and on the route to nearby city of Villingen-Schwenningen.

The electric minibus from VDL is based on the Sprinter from Mercedes-Benz. It is built at the VDL factory in Venlo, the Netherlands using parts subsupplied by Mercedes, and VDL completes the body and interior of the „Midcity electric“.

The small electric bus will be used in the local traffic Brigachtal as well as on the lines 7565 (Villingen – Sankt Georgen) and 7580 (Villingen – Bad Dürrheim). The coach is about 8,000 mm long, and passengers enter it via a double external swing door directly behind the front axle. There is room for wheelchairs and prams, and to make it easier to get on board, there is also a fold-out (wheelchair) ramp at the door.

The bus has 19 seats (including folding seats), total capacity is 30 passengers.

Markus Jehle, head of the Südbadenbus branch in Villingen-Schwenningen, says: “It is an important sign that electromobility is not limited to larger cities. Regional transport should also be made more attractive by means of locally emission-free vehicles. However, it is also significant and worth mentioning that the use of electric buses is almost cost-neutral compared to diesel buses.”

The MidCity stores its electric drive energy in a lithium-ion battery, which has a storage capacity of 87 kWh. This gives the vehicle a range of 140 kilometres. The battery is recharged via CCS combo plugs from an external charger or an on-board charger that is always in the bus. The complete charging cycle process takes between two and four hours.

By means of the current test routine, DB Regio Bus is primarily interested to figure out how the electric minibus performs in the challenging topography of the Black Forest and in winter temperatures. The current weather may be ideal to gain such kind of experience during the cold season …

Christopher Alting, Head of Fleet Management at DB Regio Bus, explains the purpose of this test deployment: “The experience gained from practical testing – like here in the Black Forest – forms the basis for a locally emission-free public transport system to be developped. And not just here at Südbadenbus, but throughout the entire DB Regio Bus network. With this test, DB Regio Bus is further expanding its expertise in the field of alternative drives. And we can already offer this competence to our customers nationwide for customised and economically sustainable transport concepts.“