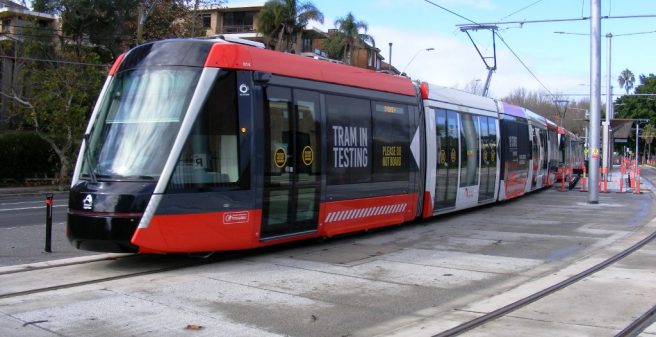 Australia’s 4.6 million people-city Sydney is heavily investing in urban and suburban rail transportation. The country‘s first metro line was opened on 26 May 2019, with much echo in the national and international press – UTM also reported here:

Now the attention has turned to the two major expansion projects of the single-line light rail system, in operation since 1997 and extended to the current length of 13 km in 2014. The first project inlcudes two lines of combined 12 km length, which run from the Circular Quay via CDB and Central Station (with connection to the existing line) to the South-Eastern suburbs terminating in Kingsford and Randwick. In downtown Sydney the trams run without overhead on Alstoms’s APS systems with power supply via the third rail on the ground which is being activated only once a tram is entirely covering the respective short stretch.

Construction is largely complete and tests are under way for some time. The opening of the Randwick line is scheduled before the end of 2019, while the Kingsford branch will start service a few months later, during the first half of 2020.

CAF, however, is once again the supplier of the tramways for the second light rail project currently under construction – this time by using 13 of the seven-section URBOS model. This project called „Parametta Light Rail“ has no physical connection to the other lines in operation – it will serve a 9 km long route being newly built between Westmead on the T2 suburban line via the old center of Parametta to Camellia, where it takes over today’s outer section of the suburban line T6 to Carlingford. In the inner area of Parametta, the trams will also run without overhead over a stretch of the route using super capacity storage facilities on board of the vehicles. Opening of this route is foreseen for 2023. A second stage to connect Parametta CDB with Sydney Olympic Park is currently under study.

Meanwhile construction work continues on the cross-downtown extension of the new driverless metro with an expected opening of mayor part of it forseen in 2024. The line will run from the current terminus at Chatswood cross-downtown, connect south of the city at Sydenham to the existing suburban network and will continue over today’s suburban route T3, which will be converted into a metro operation as far as to Bankstown station.

The suburban network recently took the delivery of 24 new double deck trains of the Waratah type supplied by the Australian Downer ED consortium, with mechanicla parts supplied by CRRC. 17 more are on order for delivery starting in late 2020 onwards.