Szeged in Hungary: The Tram-Train service will be extended step by step 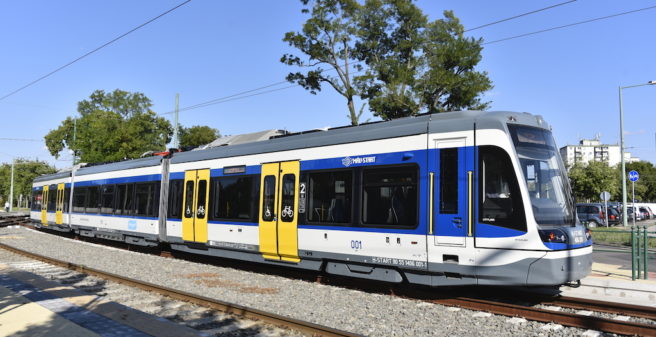 Another country has joined the Tram-Train operators “club” since 29 November 2021:

These systems have been introduced as a link between tram and regional rail infrastructure in various regions around the world, especially in Europe, over the past two decades – and now Hungary is one of them. In the city of Szeged, located in the very south of the country with a population of around 160,000, there has already been a standard-gauge tram network since 1884 (electrified since 1908), which until now consisted of lines 1, 2, 3, 3F and 4 with a route length of 17 km: It has now been extended by a 32 km connection to the neighbouring city of Hódmezővásárhely. Passenger service began on 29 November 2021, initially at hourly intervals, to be extended to 20 minutes intervalls in January 2022. Until 15 April 2022, the ride is free of charge, until the operation runs smoothly and without problems. In addition, car drivers should be encouraged to test the new, environmentally friendly connection and to use it frequently in the future – instead of their own cars.

In Szeged, the starting point of this new TramTrain tram line is at the terminus “Szeged pályaudvar” (Szeged Central Station). On the 4 km long, double-track section from the terminus “Szeged pályaudvar” to the railway station “Rókus pályaudvar”, the TramTrain, which is operated by the state railway MAV, operates in electric mode using the overhead line of the existing tram line 1. In north-eastern direction, 800 metres after the station “Rókus pályaudvar”, the brand-new tram line integrates the classic line of the Hungarian State Railways (MÁV) with two single-track sections, a first one of 3 km and a second one of 3.5 km, were double-tracked, and detaches shortly before Nepkert station at the south-western entrance of the city of Hódmezővásárhely. Between the stations “Rókus pályaudvar” in Szeged and “Hódmezővásárhely Nepkert” the tram runs in diesel operation and reaches a speed of 100 km/h. Between the two stations mentioned above, the tram stops at Algyö station. Starting at the “Hódmezővásárhely Nepkert” stop the trams again run in electric mode under the new overhead line using a newly-constructed single-track alignment in the streets thorugh the city centre of Hódmezővásárhely to the square in front of the main station. Of the four intermediate stops of this 3.2 km long section within the town, only the “Kossuth tér” stop is equipped with a passing loop for the trains to cross.

Eight “Citylink” of the Swiss manufacturer Stadler numbered 403-001 to 403-008 were delivered by the Valencia factory in Spain. An option for 4 more units has been exercised in the meantime. These multiple units are suitable for double traction operation in the future. The first tram-train set was delivered in January 2021, and tests on the new line started in February 2021. The 37 m long tramcars weigh 71 tonnes, are air-conditioned and have video surveillance, wifi and USB charging stations on board. Each vehicle can carry up to 216 passengers, including space for four wheelchairs or eight bicycles and prams.

In cooperation with our French partner: https://tramwaydemontpellier.net