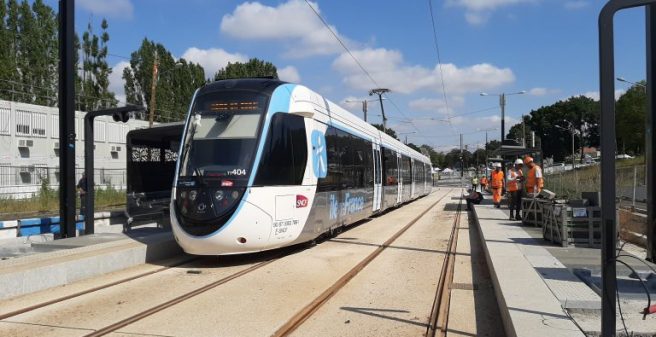 In the North-East of the Paris region, tram train line T4 is being extended by 6.5 km. The first technical test rides have started mid of July 2019 with the new Alstom Citadis Dualis tram trains which will be deployed on this line.

The extension is branching from the existing regional train line to Montfermeil. Line T4 has been inaugurated in 2006 and used to be a former regional commuter line with low train frequency. Connecting Bondy and Aulnay-sous-Bois, the so-called “Coquetiers” rail line dates from 1875 and has seen a certain renaissance with its’ conversion to a light rail/ tram train line with increased train frequencies, additional stops and Siemens Avanto tram train rolling stock with a high acceleration.

After the conversion of line T4 into tram train operation, it has always been the plan to extend the service with an actual “tramway-type” extension through the urban areas between Bondy and Montfermeil.

The cost of the project is estimated at 270 million euros for infrastructure work. The cost of rolling stock is estimated at 100 million euros. The project is funded by approximately 86% by the Île-de-France Region and the State under the Espoir Banlieues plan and the 2015-2020 State-Region Plan contract and about 14% by SNCF Réseau. The rolling stock investment and the operational cost of the new T4 branch are 100% financed by Ile de France Mobilités, the Paris region land transport authority.

The project is executed by Ile de France Mobilités (IdF) and has been supported by Systra, a Lyon-based transport planning and consulting firm.

Four substations for 750 V DC have been installed whereas the existing T4 line is operated with 25 kV AC 50 Hz under mainline railway operation as it originates from a railway line. This also means that with the extension of the line to Montfermeil, T4 will become a “pure” tram train operation just now.

The construction of the line to Montfermeil is in so far important as the area is a socially disadvantaged neighbourhood. There is hope that thanks to the new tram train connection, people will have a better connection to the capital and to educational institutions.

So far, line T4 has been operated with a fleet of 15 Siemens -built Avanto tram trains which officially named U 25500 in the SNCF numbering system. At the time of the Avanto delivery, it was the first tram train in France. The trains have a length of 37 m and are articulated with five cars, two driven end bogies and two non-motorised medium bogies. The vehicles were painted in the Transition regional and commuter train livery in blue with coloured doors.

For the extension, SNCF is taking delivery of 15 Alstom Citadis Dualis which incorporate the new IdF livery in white and silver. These tram-trains are part of the framework contract signed in 2007 by SNCF for 200 train sets. Two options have been exercised for Ile-de-France, one for 15 trains in June 2014 for the T11 Express line, and one for 15 trains in December 2015 for the extension of line T4. The Citadis Dualis are based on Alstom’s Citadis low-floor tram concept, but fitted with turning bogies and with four long carbodies, resulting in a 42 m train. In the variant for Paris, the train has a width of 2.65 m, a 38 cm high floor and a passenger capacity for 250 passengers. In order to operate on the tram section, the Alstom Citadis Dualis have been fitted with a specific tram train wheel profile.

To date, 48 Citadis Dualis tram-trains have already been made at Alstom’s Valenciennes site: 24 for the Rhône-Alpes region in commercial service in western Lyon since 2012, and 24 trains for the Pays-de-la-Loire, in commercial service on the Nantes-Clisson and Nantes-Châteaubriant  lines from June 2011 and February 2014 respectively and 15 on the Epinay-sur-Seine and Le Bourget sections of the T11 “tangentielle nord” line in the Paris region since July 2017.