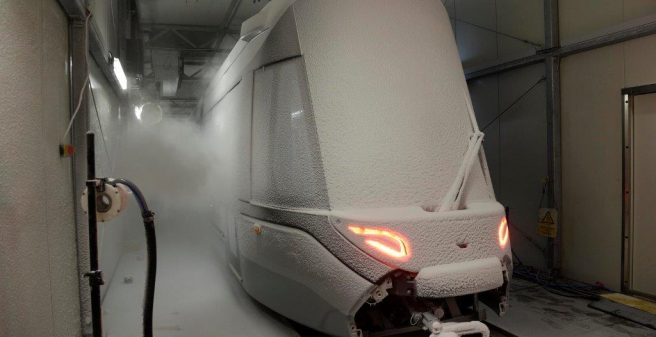 The new CAF Urbos trams are extensively tested before entering passenger service - one of the tests being the climate chamber test as seen here at the DB Systemtechnik climate chamber in Minden, Germany I Photo: GVB/ https://over.gvb.nl/

Amsterdam is receiving new trams! The first new CAF Urbos low-floor tram arrived in Amsterdam in April 2019 and is currently undergoing intensive testing and driver training. The trams will enter commercial operation at the end of 2019. Amsterdam’s public transport operator GVB Activa B.V. ordered a total of 63 Urbos low-floor trams with CAF in 2016 with an option for further 63 trams. The new bidirectional vehicles are 100 % low-floor and consist in five modules.

Amsterdam’s tram network has a length of 95 km with 16 lines operating. The network is currently operated with 155 Siemens Combino low-floor trams and 45 BN-built 11G and 12G high-floor trams with low-floor centre section. The main reasons for the procurement are the following:

The CAF Urbos 100 trams will receive the series denomination 15G in Amsterdam, following tradition of Amsterdam’s trams. CAF will supply the 63 five-section trams by 2022. Each tram has a length of 30 metres and a width of 2.4 metres. Each tram has a capacity for 175 passengers, including 50 seated. The trams are equipped with both cab air conditioning and passenger saloon air conditioning with an energy-efficient heat-pump and CO2-sensors in order to regulate the fresh air flow. Furthermore, the vehicles are equipped with a control and monitoring and a front collision systems.

Since May 2019, testing is carried out on Amsterdam’s complex infrastructure. Since June 2019, specific vehicle tests and driver training are taking place. In July 2019, one Urbos has been measured in the climate chamber of DB Systemtechnik in Minden, Germany.