The end of the E1 trams in Silesia, Poland 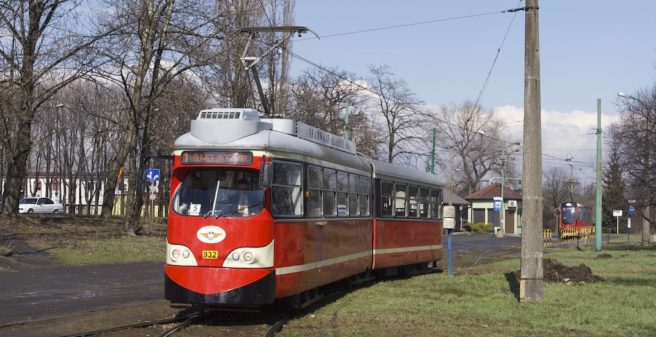 The ex Vienna trams in Silesia were given many different nicknames from passengers. They were called, among others, “schnitzels”, “francks” or “Viennese”, but their official type designation is completely different. On Sunday, 14 March 2021, the Silesian Trams (TS) will end the scheduled operation of E1 type trams. Only two cars will remain on stock, to be used in emergency situations.

For the past 10 years, the “sznyclach” trams could be seen on lines 1, 11 or 26. Currently, they run only on the latter line, connecting Mysłowice with Sosnowiec. They were built in the 1970s by Lohner for the Viennese tram. Ten years ago, a few of these trams were bought by Tramwaje Śląskie SA. We reported about the history of the E1 trams here:

It was a profitable venture, since the purchase, transport and modernisation of these cars cost half of what we would have had to spend on the overhaul of the heavily used 105N series cars, and the E1 cars served us bravely for almost ten years.

After arriving in Poland, the cars underwent a small renovation at the Silesian Trams Service and Repair Centre in Chorzów-Batory. They were painted red among and were fitted with double front lights and a front cover, HVAC for the driver, new LED direction signs and new seats in the interior. In October 2011 the first two cars debuted on line no. 26.

Silesian Trams still remember the unsuccessful debut, because on the first day of the passenger journey one car derailed and the other one got into a bump. At one point the tram operator had 24 E1 trams in stock, which could be found on lines operated by depots in Gliwice and Będzin.

For some time, however, E1 type cars were slowly being decommissioned. The up to 50 year old trams were showing signs of fatigue and maintenance was gradually getting more expensive. During the past years, Tramwaje Śląskie has put new low-floor trams into operation which relieved the situation.

Out of the 15 cars from Vienna only four are currently in use – all of them in the Będzin depot. The last time an E1 car will go on line no. 26 is on Sunday 14.03.2021. From Monday, the E1 cars will take their well-earned retirement.

However, two cars will remain in Silesia/ Katowice. They will be treated as historical trams for occasional trips. They can also always be a reserve in case of a breakdown of the 105N series car.

The passenger capacity is 152 seats, including 34 seats. Each E1 tram has travelled more than 10 million kilometres on tracks in Katowice, the Upper Silesian and Zagłębie Metropolitan Area. For those tram enthousiasts who want to travel on an ex Vienna E1 tram in Poland, a journey to the nearby Krakow is highly recommended where a total of 57 E1 trams are still in service. In Vienna, a total of 11 E1 trams with their c3 trailer cars are still in service.

The Silesian standard-gauge tram network has currently a length of 168 km and is operated by 29 lines. The network has suffered numerous line closures over the past decades. From the record 353 million passengers in 1983 is now down to roughly 100 million passengers per year. The rolling stock consists in a total of 322 trams, including different types of Konstal 105N trams, 17 Alstom Konstal Citadis 116Nd, 40 Pesa Twist trams (2012N and 2017N), 15 ex Frankfurt/Main Pt (of which 9 modernised), 27 partly low-floor Modertrans Moderus Beta trams (MF 10 AC Beta, MF 11 AC BD Beta, MF 16 AC BD Beta) as 15 m trams and three-car articulated versions with a length of 28 m. We reported about the Modertrans trams here: