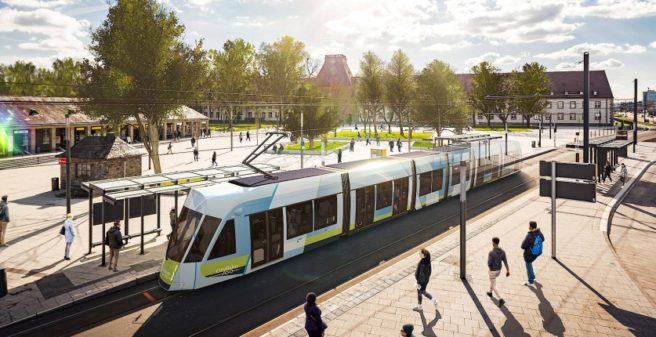 Over the course of the past few decades, modern low-floor tramway systems have either been introduced or reintroduced in many places around the globe as an attractive alternative to saturated bus transport services, especially in medium-sized cities. In Germany, however, the introduction of new low-floor tram systems has failed in various places.

In Wiesbaden, the capital of Germany’s Federal State of Hesse with currently almost 280,000 inhabitants, another tramway concept has now to be added to the list of failed projects. On 01 November 2020, Wiesbaden’s citizens had to vote on a detailed and fully funded project to reintroduce a singe-line tram operation in the form of a citizens’ petition (“Bürgerbegehren”) – and approximately 61% of them rejected the project. Even the turnout was surprisingly high, with 46.2% of citizens entitled to vote. Obviously, the arguments of the project’s proponents, which included the Lord Mayor Gert-Uwe Mende (SPD) and significant parts of the city council parties, as well as the Chamber of Commerce, the DGB (German Trade Union Confederation), various other interest groups as well as the works council of the municipal transport company ESWE as representatives of the bus drivers, were not accepted by the majority of the voters. Two citizens’ initiatives had raised public opinion against this major project, in some cases with arguments that were not very fact-based.

An alternative transport concept for coping with the daily problems, the related traffic and environmental issues is not readily available. The CityBahn would have substantially reduced commuter traffic by private cars into the city. The use of e-buses, which started just a few months ago, will hardly suffice to resolve the obvious problems.

The CityBahn tramway plans included a 35 km long connection from the neighbouring city of Mainz (Hochschule as terminal stop) across the Rhine, through the city centre of Wiesbaden and further on as an interurban tramway on the route of the Ahrtalbahn to Taunusstein and Bad Schwalbach, which has been out of service for years. It would have been operated in metre gauge as a joint service with Mainz’ tram. Various inner-city route options had been discussed in recent years. Funding was available to cover 90% of the expected total investment of 426 million euros. The city’s own contribution thus remained very manageable. All grants were earmarked funds which are now no longer available for other projects.

Currently, Wiesbaden’s public transport is largely provided by ESWE Verkehrsgesellschaft mbH with its 271 buses. They operate on 41 lines and carried around 61 million passengers in 2019. The ESWE bus fleet consists mainly of Mercedes-Benz Citaro models. 56 eCitaro are on order, 10 of them have already been delivered.

Wiesbaden previously had a metre-gauge tramway system, but large parts of it were converted to bus operation already in March 1929. On 30 April 1955, the last three lines 6, 8 and 9 ceased service in Wiesbaden. Line 6 and the 9 were jointly-operated with Mainz tram and crossed the Rhine.

Two other attempts to introduce a modern tramway system in Wiesbaden had been started in 2001/2 and 2012, but eventually failed, too.