The funicular tramway in Viseu 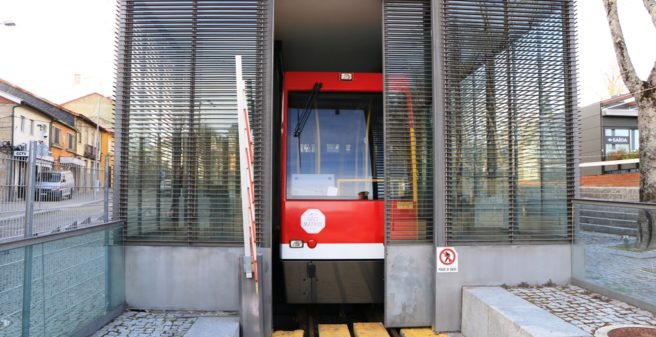 Out of service - lower terminus of the funicular | © Dirk Budach

Funicular lines in public streets are not very common, as they usually considered as having a high potential for conflict with other road users. Among the best known are probably the three such operations in streets with steep gradients in the Portuguese capital Lisbon, all of which now well over 100 years old.

It is all the more surprising that only about 15 years ago such a funicular was built in a small town further north in the country. On 25 September 2009, the 400-metre-long, entirely straight line started revenue service in Viseu, with the intention of connecting the old town situated on a hill with a large car park at the foot of the hill, thus reducing car traffic in the narrow streets – P&R at its best.

The Swiss company Gangloff supplied two vehicles, the Portuguese company Liftech built the system with support of local partners. The tracks are laid and paved on one side of a local road, but separated by small pillars. In the middle of the route there is a passing loop, and there are three crossing roads along the line. The traction cable is guided underneath the track bed through a guiding channel under the road surface.

Usage fell short of expectations, even after the introduction of free of charge transport. The operating costs of around EUR 350,000 per year then provided the impetus in 2018 to consider a driverless system as an alternative. A vehicle in the form of a kind of minibus was to replace the funicular service. In fact, however, it has not yet been introduced, and nothing more concrete happened with regard to this allegedly less expensive solution. The operation of the funiculars has been interrupted several times since 2019, in the wake of the Corona crisis and also in preparation for the announced changeover. Currently, traffic has been suspended again for several months without an alternative being offered. Meanwhile, the facilities, for which EUR 5.2 million were invested at the time of construction, are falling into disrepair.

A change in the city government now seems to reconsider other ooptions than an underproven driverless system: the mayor has publicly declared his support for the resumption of the funicluar, which means that the unrealistic minibus project is off the agenda, at least for the time being.

In view of the considerable investments made, the abandonment of such a facility should not be considered at all – a quick reopening will make the city more attractive for visitors – with a tourist attraction which anyway has already prominent place in all travel guides about Viseu!