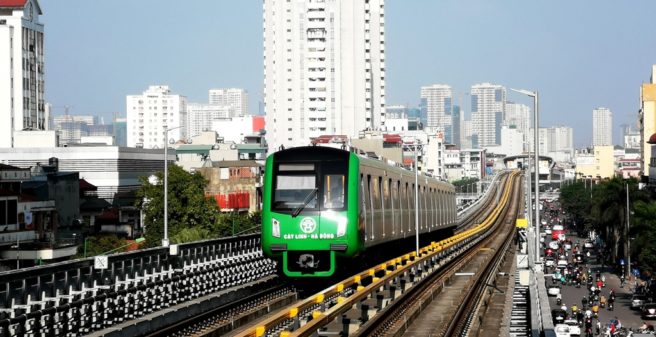 Positive news for public transportation from the Vietnamese capital Hanoi: After many years of planning, preparation and construction, the country’s first metro line officially started operation today on 6 November 2021.

Hanoi has been struggling with considerable traffic problems for many years. Since the opening of the country to Western visitors and Western-style capitalism at the end of the 1980s, not only the number of inhabitants – currently around 8 million in the metropolitan area – but also the numbers of private cars on the streets has increased rapidly. For about three decades, the public transport system consisted only of omnibuses and minibuses, which, due to the traffic congestion and poor maintenance, represented a completely inadequate, unattractive local transport service.

Until the 1980s, Hanoi had a metre-gauge tram network of five lines, one of the last tramway systems in this part of Asia. Completely run down, the service finally ended in November 1990. The year before, visitors could see a maximum of just seven operational two-axle tramcars in service, and even the purchase of five second-hand cars from Lille, France, and the re-bodying of some of the local two-axle cars during the 1980s finally did not help the system to survive.

A trolleybus service which opened in December 1986 turned out to be just as run down as the trams – after only a few years of operation. The operator assembled the trolleybuses in its own workshops using electric parts of the out-of-service tramcars, like controls, motors etc. They proofed to be very unreliable, thus, the service ended after less than 7 years in mid July 1993. Back then, the “network” consisted of only two lines. As a special feature, the trolleybuses had a driving switch and control wheel for speed regulation instead of the usual driving pedals – adopted from the tram. Subsequently the driver’s hands could not always be on the steering wheel at any given point of time!

The first line now runs along a substantial part of the very route that was serviced by the tram until 1988 and by the trolleybus from 1991 to 1993, namely to connect the current suburb of Ha Dong. Branded Line 2A, it operates over a total length of 13.1 km on a completely elevated alignment using third rail power supply. 12 stops are served. Maximum speed is 80 km/h. China Railway Group Limited (CREC) is the general contractor responsible for construction and commissioning. The construction had already started in 2012, but was completely put on hold for some time before the contractual partners were able to agree on the final technical and financial details. 13 four-car train sets were supplied by Chinese manufacturer CRRC from its Beijing plant. These trains are 76m long, 2.8m wide and have a passenger capacity of approximately 1.200. The first train arrived in 2017, with trial runs underway since May 2019. All metro cars are based at Phu Luong depot, near Yen Nghia station.

As one could expect from the number itself, Line 2A is part of a much larger network in the future. A total of eight lines are planned for the long term, including an extension of the first line. The time horizon for all projects is set by the central government at 2050.

Of this network, however, only one more line is currently under construction – Line 3. It will run over a length of 12.5 km, 4 km of which will be underground, from Hanoi’s main railway station via the Cat Linh transfer station (Metro Line 2A) to Nhon – where the depot facilities are directly connected. 4 of the 12 stations are located on the underground tunnel section. The line is expected to open next year.

Subsidised funding for the construction of the line is coming from France and the European Investment Bank (EIB), among others. Alstom is involved in the construction and is the supplier of the vehicles. The first cars arrived by sea at the end of last year. 10 additional trains were already ordered, they are also designed as 4-car trains and each of them offers a capacity of up to 950 passengers.