The next new tramway in China: Jiaxing opened „demonstration service“ 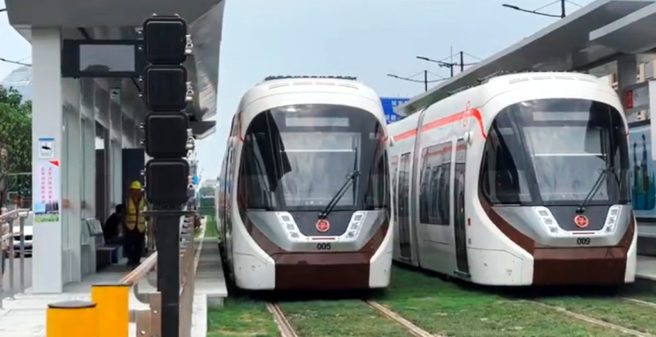 The first „demonstration section“ of China’s newest tramway system opened public service on 25 June 2021: It is the 10.6 km, 11 stop section between the Southern High Speed Railway Station and the Fanggong Road/Binhe Road Train Station in Jiaxing, a 1.2 million inhabitants city halfway between Shanghai and Hangzhou in Zhejiang province. It is part of the first stage of this new tramway system which will include another 5 km with 9 additional station, served by lines T1 and T2 and to be concluded later this year.

The two-line tramway in Jiaxing (Zhejiang province) is operated and maintained by the new Shenjia joint venture of Shanghai Keolis and the city for five years. A third line is planned to open in 2023, adding 20 km and 55 new stops. In the long run a 7 routes network is planned for the city.

CRRC supplied 20 five-module bi-directional low-floor tramcars, another 25 will follow for operation of the third line by 2023. Operation is catenary-free with short-time charging at the stops to recharge the supercapacitors installed in the trams.

Operation is every 10 minutes during most of the day. Travelling is free of charge for passengers during the first 100 days, thus the classifications as „demonstration service“. Keolis is expecting a passenger demand of approximately 50.000 per day in the mid-term.

A network scheme can be found here:
http://www.urbanrail.net/as/cn/jiaxing/jiaxing.htm

Is overhead catenary dead on new lines in China?