The NRW-RRX tendering and operational model 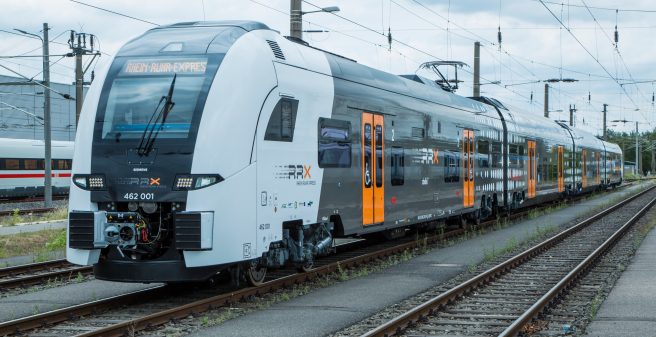 One of the 15 brand-new Siemens Desiro HC trains with two single-deck end cars and two double deck middle cars. Each train set has a total length of 105 meters and is able to transport up to 400 passengers.

In order to be able to procure and finance a uniform vehicle fleet based on the size of the RRX network and the required number of new trains while ensuring competition for the operation on the RRX lines, the so-called NRW-RRX tendering model has been implemented. The tendering process of the RRX railway operation as well as the procurement, maintenance and repair of the new RRX vehicles were awarded separately in Europe-wide competition procedures. On the one hand, it was possible to achieve the positive effects of the competition for operation in terms of price and quality. This also made it easier for small and medium-sized operators to take part in the tender. On the other hand, for the first time not only the vehicle purchase price, but the total life cycle costs were the evaluated in the procurement of the vehicles. This included the costs for energy, maintenance and repair of the trains over a period of more than 30 years.

In order to enable 15 intervals in the future, the implementation of so-called specific system tracks is planned. These will enable the operation of RRX (160 km/h) and long-distance trains (up to 200 km/h) according to a “conveyor belt principle”. The route between Cologne-Mülheim and Düsseldorf will be extended to four tracks, meaning that two tracks will be available for long-distance traffic and the RRX whereas two separate tracks will be available for S-Bahn (commuter) traffic. Between Dusseldorf-Reisholz and Duisburg Hbf there will even be six tracks. This ensures that long-distance traffic can overtake the RRX in this section of the route without the two train categories affecting each other. No major expansion projects are planned between Duisburg and Dortmund. Rather, there will be additional connections in the Mülheim an der Ruhr area so that the various train categories can flexibly switch between the long-distance and S-Bahn tracks. Furthermore, improvement measures are planned in Essen-Steele, Essen-Steele Ost, Bochum Langendreer and Bochum Hbf. A viaduct with connections is planned for Dortmund Hbf, enabling the RRX and long-distance traffic to run to Hamm and Münster without crossing each other.

Furthermore, noise abatement measures are designed to reduce noise emissions from trains running every 15 minutes, thereby ensuring the best possible acceptance of the RRX by the local residents. Furthermore, many RRX stations on the so-called outer branches are to be brought to a platform length of 215 meters. This adaptation to the RRX standard outside the main axis is financed by the state of North Rhine-Westphalia. Due to the route length and the different local conditions, the expansion measures are divided into a total of six planning approval sections. As part of the relevant planning approval procedures, the statutory formal administrative procedure, all legally relevant aspects of the infrastructural reconstruction measures are reviewed. For some of the sections, the planning approval procedures have already been completed and work has already begun. Completion of the entire RRX infrastructure is scheduled for 2030 – 2035. These measures are also part of the Federal Transport Infrastructure Plan 2030 as Priority Needs.