The opening of the new tram section in Perm, Russia 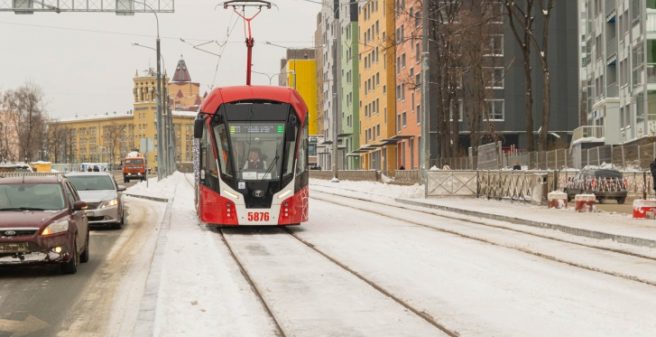 PK Transport Systems' Lionet low-floor tram on the new line at Ulitsa Revolyutsii I, which opens on 16 January 2021 © 59.ru

Perm tramway was inaugurated in 1929. The first tram route (Motovilikha — Razgulyai — Ulitsa Krasnoufimskaya (now – Ulitsa Kuybysheva)) was 13.2 km long and was served by 11 F trams, produces at the Putilov Plant in Saint-Petersburg (now – Kirov Plant). The tramway development reached its peak in the 1970s when 15 tram routes were operating in the city. Later, some lines and the original tram depot were closed due to the lack of funding. A trolleybus operation was launched in 1960.

Today, the total length of the tram network is 48.8 km. 144 tram units are in service, stationed at two depots. There are 10 tram types in operation in Perm, mostly produced by Ust-Katav Car-Building Plant. Daily ridership is 150,000.

The new 1.1 km tram section along Ulitsa Revolyutsii was opened on 16 January 2021. It is connecting the tram stops Dinamo – Dvorets Sporta Orlyonok in the city centre. It was inaugurated and personally tested by the Governor of Perm Krai Dmitriy Makhonin and Acting Mayor of Perm Aleksey Dyomkin.

The track laying was part of the reconstruction of Ulitsa Revolyutsii, which was undertaken between 2018 and 2021. Funding was provided by the Road Fund of Perm Krai (75%) and Perm City Administration (25%).

“Since 1970, there was no development of the tram network in Perm, and this is our first new project,” said Aleksey Dyomkin. “We have lots of positive response regarding the arrival of the new fleet of trams and buses, but also have the complaints on our routes’ operation. We will fix them”.

Recently, the city of Perm pays large attention to public transport development. The city is upgrading its tram rolling stock and renewing the tracks. Modernization of Fare collection systems is also underway: bank cards are allowed to be used in transport and a new transport smart card system was introduced.

In December 2019, the three-sectional tram model 71-934 Lion and one-sectional 71-911EM Lionet, produced by PK Transport Systems in Tver, were delivered to Perm. In 2020, the city received 13 type 71-911EM units, 9 more tram cars will be delivered to the transport operator Permgorelektrotrans until March 2021.

“Last year, over 480 new buses were put in service, we have purchased 22 new tram cars, and 50% of our fleet will be renewed by 2023”, commented Dmitriy Makhonin to the press. “We are planning to further develop our tramway system, 500 million roubles (ca. 5.64 million Euro) were allocated for the track reconstruction. Our aim is to make our transport convenient to the commuters”.

The reconstruction of the tram line to Motovilikha is underway, services will be restored in August. Another track reconstruction along Tramvaynaya Ulitsa is also taking place. In the long-term, extensions to Sadoviy and Iva districts and Perm International Airport are planned.