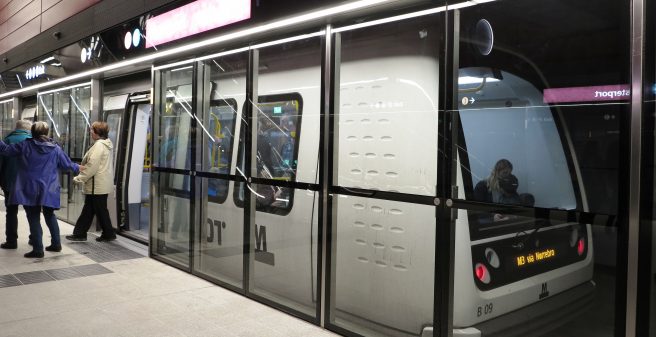 Copenhagen has a third metro line! On 29 September the official inauguration ceremony took place, in the presence of Queen Margrethe II. Revenue service 24/7 started at 16.00h the same day.

With the exception of the electrified suburban commuter network “S-Tog” in the capital Copenhagen, Denmark did not have any electric urban rail system for more than three decades after the closure of Copenhagen’s tramway system in 1972. The return of electric city transport occurred when the new, fully automated metro first opened in October 2002 with two relatively short routes, M1 and M2. Both were soon expanded and reached their full extension in 2007. The metro is widely accepted among Copenhagen’s population and visitors – with more than 180.000 passengers daily the metro it is clearly a success story.

Plans to build more metro lines already emerged already before the opening of the first lines, and after lengthy public discussions, planning and approvals, tunnel construction finally began in 2013. The construction and tunneling work was undertaken by the Italian joint-venture led by Salin Construttori (about 60%) and Tecnimont (about 40%) with Seli as third partner for the construction part.

The third line M3 is a full circle line of 15.5 km with 17 stations, giving it the name „Cityringen“. Other than the two previous lines, M3 runs entirely underground, but the station design clearly resembles the M1 and M2 design pattern. The stations are designed as island platforms and platform doors to facilitate driverless operation: M3 is again fully automated and operates 24/7, at peak times with a frequency of just 100 seconds. With a travel speed of 40km/h on average the journey around the circle will take some 24 minutes. It is expected that the total daily passenger number on Copenhagen Metro will increase to 460.000 approximately.

According to media reports, the total cost of the Cityringen line is ca. 22.4 billion kroner (3 billion €), slightly surpassing the initial projected cost of 21.3 billion (2.85 billion €).

M3 uses 3-car trainsets built by Hitachi Rail Group / Ansaldo STS with only some minor technical modifications compared to the trainsets on M1 and M2. 34 were supplied in 2002-2004, and for the expansion another 28 have been ordered and now commissioned. All trains are 39 m long with a width of 2.65 m and offer a capacity of up to 300 passengers. The signaling infrastructure has also been provided by Hitachi Rail STS (formerly Ansaldo STS).

A fourth metro line is also under construction: It consists of two branches of the circle line M3. The first section of M4 with two new stops branches off at Osterport and terminates on surface at Orientkaj. Opening of M4 between Orientkaj and Central Station is scheduled for next year while the Southern section between Central Station and Ny Ellebjerg should be ready in 2024 adding another five underground stops. The total length of the metro Copenhagen will then be 40 km.

A network scheme can be found here: