The remains of Salzburg’s old tramway 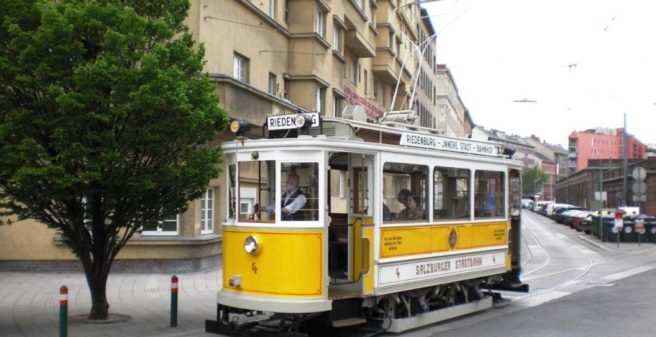 Restored tram no. 4 in service in Vienna | © Gunter Mackinger

In 1909, the first and only Salzburg tram line was opened and soon extended in stages to the Riedenburg district at the former city border with Maxglan. On 29 November 1916, th standard-gauge Salzburg Stadtbahn (light rail), also called “Yellow Electric” (“Gelbe Elektrische”) because of the color of its cars, reached its maximum length with 2.95 route kilometers.

Due to the narrow streets in the old town center with various, very tight curves, the system had little to no future potential from the very beginning. As early as in the 1930s, trolleybuses were increasingly considered as a more suitable alternatives. Consequently, on 25 September 1940, the tram services were terminated between Riedenburg and Sigmundsplatz. Immediately after the last tram had passed, the overhead lines were dismantled. On 29 September 1940, the first test rides of the trolleybuses began and already on 1 October 1940, the trolleybus operation was officially inaugurated between Maxglan and Sigmundsplatz. The remaining tramway operation was reduced in two steps before the entire operation came to a complete standstill on 5 November 1940.

The tracks were mainly dismantled between 1945 and 1970. Therefore it was all the more surprising that in the process of sewer construction worksin April 2020 – 80 years (!) after the closure of services – some of the tracks were detected 40 cm beneath street level near the former Riedenburg terminus. These remnants of the over 100 years old rail track were then finally removed.

One of the survivors Salzburg’s old tramway is the former tramcar no. 4 – beautifully restored to operational conditional and preserved by the operator Salzburg AG today.