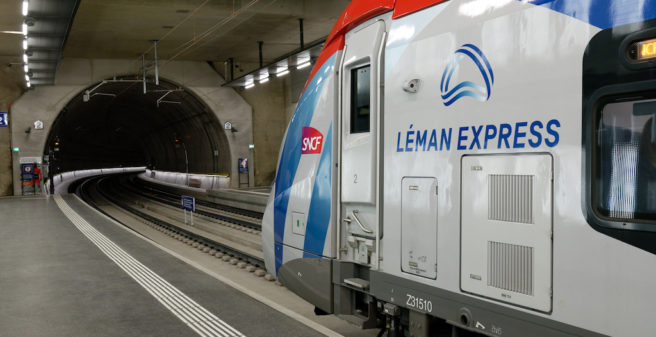 Three rail connections between Geneva and the neighbouring French regions were opened on 15 December 2019: the S-Bahn “Léman Express”, the largest cross-border local transport network in Europe, regional train connections from Annemasse to Switzerland and the new tram line 17.

The cross-border Swiss-French agglomeration “Grand Genève” has 980,000 inhabitants, around 40 % of which live in France, and the trend is rising. Two thirds of the jobs are in Geneva. This generates around 450,000 journeys between the cantons of Vaud and Geneva every day, as well as around 150,000 journeys between France and the canton of Geneva, of which only 16 % are currently using public transport. There are therefore traffic jams every day.

The State Treaty for the construction of the rail link from Geneva to Annemasse (Cornavin – Eaux-Vives – Annemasse, abbreviated “CEVA”), a connecting line that links the Swiss rail network to the neighbouring French one, was concluded in 1881, but has just now become reality. Today, the 16.1 km of the “CEVA”, built since 2011, most of which as a new underground and double-track line on the Swiss side, connect Geneva with the neighbouring French city of Annemasse. Five new underground stations have been built in Geneva and Annemasse station has been upgraded from four to six tracks to be able to handle more trains.

First passenger feedback on the design of the new stations in Geneva criticise a poor accessibility for people with disabilities, too long distances in the stations, as well as insufficient numbers of escalators that are considered to be too narrow.

For the suburban S-Bahn network “Léman Express” in the Swiss-French border area around Geneva, which went into full operation on 15 December 2019, the “CEVA” is the centrepiece. It opens up a 230 km long S-Bahn network with 45 stations, all of which are designed to allow for double traction of the 72 to 74 m long S-Bahn trains each of which is around 150 m long. The construction lasted 8 years and the project cost € 1.7 billion, of which around € 1.4 billion was spent in Switzerland. The 40 new trains alone cost a total of around € 360m. A joint stock company “Lemanis SA”, based on Swiss law, was founded in Geneva as a partner for the authorities, for legal questions, offer planning, communications, marketing, business quality, rolling stock and customer information. It is 60 % owned by SBB and 40 % by SNCF.

In the core area between Coppet via Geneva-Cornavin to Annemasse, the “Léman Express” offers a 10-minute weekday frequency. It operates 6 lines with a total of 240 daily train journeys and connects Coppet in the Swiss canton of Vaud via Geneva to the French region between Evian, Bellegarde sur Valserine, Annecy and Saint-Gervais-Le-Fayet near Chamonix. It opens up a diameter of around 100 km around Geneva and offers connections to both the Swiss and French rail networks.

A total of 40 four-car 160 km/h low-floor multi-system articulated trains with approx. 2000 kW continuous output were procured. The Swiss SBB bought their trains from the domestic manufacturer Stadler, namely 23 inexpensive Flirt France (RABe 522). They are 74 m long, have 8 doors on each side, 181 seats, 20 of them in first class, and can operate under the Swiss voltage of 15 kV 16.7 Hz and the French voltage of 25 kV 50 Hz. SNCF has procured 17 Régiolis (Z 31500) from Alstom. These are 72 m long, have 7 doors and 204 seats, and thanks to their three-system traction with an additional 1500 V DC, they can also be used elsewhere in France. A joint order would certainly have resulted in significant cost savings thanks to the economies of scale.

The “Léman Express” is expected to shift a further 12 % from road to rail and to transport 50,000 people a day, some of them in French-Swiss border traffic. If total traffic continues to increase by around 5,000 daily trips, as in previous years, the road will continue to be congested.

If you compare the Zurich S-Bahn with a catchment area of about the same size and a population of around 1.1 million, which is about 12 % larger, the “Léman Express” seems to be severely undersized and will therefore hardly be able to take on substantial additional portions of private transport. In and around Zurich there are around 250 double-decker trains with a total seating capacity of around 90,000 seats, which transport around 600,000 passengers daily; the “Léman Express” has only 40 single-decker trains with almost 8,000 seats and therefore only expects 50,000 passengers. Using all the reserves, perhaps 90,000 could be reached; everyone else will still have to use the road.

Capacity expansion in the area of the main train station Geneva-Cornavin is planned for the period after 2025 and after 2035 new, mainly inner-city routes are envisaged to complement the “Léman Express”.

The “CEVA” is not only used by the “Léman Express”; in addition to the S-Bahn trains, SBB regional express trains run every half hour from Annemasse via Geneva to Lausanne and further onwards. 13 six-part, 150 m long, double-decker RABe 511 multiple units for 15 KV 16.7 Hz from Stadler with 535 seats each, 120 of them in first class are providing this service. They have already been running between Lausanne and Geneva since 2012, as well as at the Zurich S-Bahn.

High-performance tram from Annemasse to Geneva

On the same 15 December 2019, the first phase of the new tram line 17 of Geneva’s “Transports Publics Genevois” (TPG) to the neighboring French town of Annemasse was reopened, 61 years after having been closed, and after more than two years of construction. At peak times, it connects Annemasse every 9 minutes in around 25 minutes, almost as fast as the “Léman Express” with the Lancy-Pont-Rouge-Gare train station in Geneva, where a customer centre that is open on weekdays, was also set up. It offers good interchanges to the Geneva S-Bahn stations, but does not pass by Annemassse railway station. On the Swiss side, the route served by line 12 to the Moillesullaz border station has existed since 1882. The first phase of the extension now includes four stops in Annemasse; in the final expansion, there will be a total of seven stops over a length of 3.3 km by 2022. 12,500 daily passengers are expected. The total cost amounts to € 85.6 m. Swiss and French authorities contributed roughly half of the cost each . The route consists largely of lawn track with no turning loop at the end. The line is operated with the existing bi-directional low-floor vehicles of the TPG tram fleet, Bombardier Cityrunner and Stadler Tango.

A further cross-border extension of the tram to the French town of Saint-Julien-en-Genevois is planned for 2023 if the financing can be clarified in good time.

Further pictures and information of the new tram line can be found in the following UTM report: