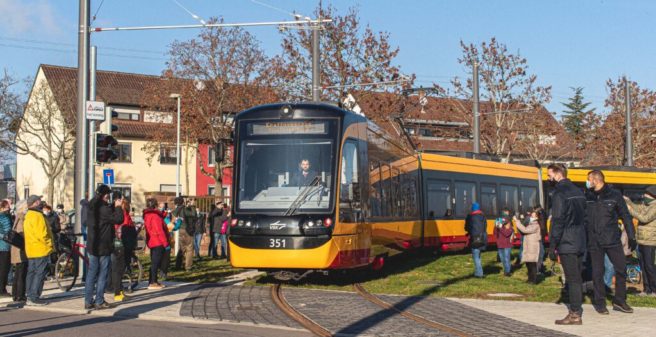 On Saturday, 28 November 2020, Verkehrsbetriebe Karlsruhe (VBK) – the municipal public transport operator – started revenue service on the extension of its tram line 2 to Knielingen-Nord. The new terminal loop is located in Egon-Eiermann-Allee. Starting from the previous turning reverser at Lassallestraße, the new 1.6 km long section of the line serves four new stops Sudetenstraße (near the previous terminus Lassallestraße now out of service), Pionierstraße, Egon-Eiermann-Allee and Knielingen-Nord. Construction work took approximately 20 months, but could have started only after more than 20 years of planning.

The opening took place without much ceremony. Karlsruhe’s Lord Mayor Dr. Frank Mentrup, Ursula Hellmann, chairwoman of the Knielingen citizens’ association, as well as Dr. Alexander Pischon, Ascan Egerer and Christian Höglmeier from the VBK management held a modest ceremony in the presence of the press, after which planning operations began. Part of the construction costs of €14 million in total have been funded in the amount of €6.1 million by subsidies under the Landesverkehrsfinanzierungsgesetz (federal state transport financing law LGVFG) by the federal state of Baden-Württemberg.

The next major step in the expansion of Karlsruhe’s light rail network is the opening of the inner-city tunnel, the so-called “Kombilösung“ (combined solution), scheduled to open in Dezember 2021.

A network map can be found here: