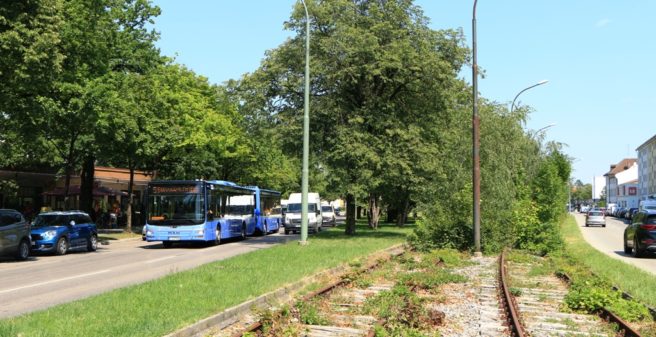 Boschetsrieder Strasse in July 2019: 28 years after the closure of tram services. From 2026 on, the bus line 51 with bus trailers will be replaced by trams | © Dirk Budach

Stadtwerke München (SWM), Munich’s public services company, submitted the planning approval application for the so-called western tram tangent to the Government of Upper Bavaria (ROB) on 9 April 2020. The start of the approval process marks the next important milestone for the construction of the approximately 8.3 km long new tram line which would link the five districts of Neuhausen-Nymphenburg, Laim, Hadern, Sendling-Westpark and Thalkirchen-Obersendling-Forstenried-Fürstenried-Solln. According to the current planning status, construction of the new western tram line would start in 2023 and be finalized in 2026. The plan is to put it into operation for the timetable change in December 2026.

The new western tangent will partly run on tram routes that were closed in the 1990s. When the metro line 3 was extended to Fürstenried-West on June 1, 1991, the then tram line 16 was discontinued along its entire route. Parts of the track system on Boschetsriederstrasse and a tram loop on Ratzingerplatz have been preserved to this day.

When the metro line 6 was extended from Holzapfelkreuth to the Großhadern Klinik on May 23, 1993, after many discussions and protests, the tram line 26 between Westendstrasse and Lorettoplatz was finally shut down. On the Würntalstraße, the new west tangent will cross the former route of line 26 at a right angle.

The new route is expected to have 17 stops. With the new tram extension Munich’s 82 km long tram network would grow by ca. 10 %. The western tram tangent replaces Metrobus 51 and connects various metro lines (U3, U5, U6), tram lines (12, 16/17, 18, 19) and the Laim S-Bahn/ commuter rail station. Today’s line 12, currently connecting Schwabing and Romanplatz, will be extended on the new line until Aidenbachstrasse.

Forecasts confirm that the “Tram Westtangente” will attract significantly more passengers than todays buses. The same applies to the existing tram line 12 between Romanplatz and Schwabing through the extension to Laim and Sendling.

Activation of another tram line in Parzivalstrasse

In a second planning procedure, applications will be made to use the tram tracks in Parzivalstrasse in Schwabing, north of the city center, for regular service in the future. To do this, the existing planning approval decision must be changed accordingly. So far, the tracks on Parzivalstrasse may only be used by incoming and outgoing trains that are used on line 23 which is currently a sort of “satellite” line in the Munich tram network. A permit for regular services would allow new direct connections between Parkstadt Schwabing, Scheidplatz and the city center.

In addition, MVG are currently planning two further tram extensions: the Northern Tangent with a catenary-free crossing through the Englischer Garten (2.2 km between Tivolistraße, Elisabethplatz and Müncher Freiheit) and the extension of tram line 23 in the north of Munich, connecting Am Hart and Kiefergarten. There is currently no detailed schedule for either project. According to press reports, the MVG are also planning the introduction of 2.65-meter-wide and 60-meter trams – instead of the currently common 2.30-meter width and 37-meter length (for the four-car Siemens Avenio T-cars). This will result in the widening of the track center distance and the extension of the platforms. Since this is not possible on all routes, the measures and thus the later use of the wider vehicles would be limited to certain routes. The MVG plans a time frame of around 10 years for the implementation.