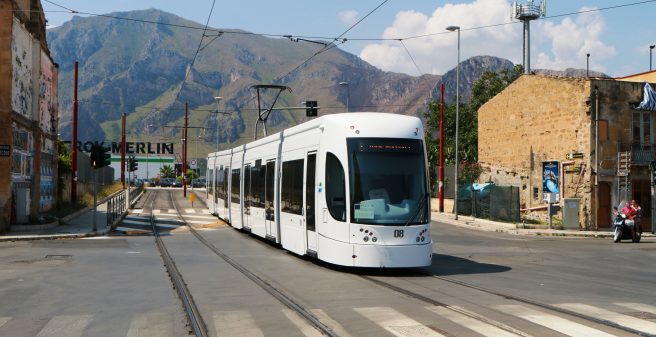 The „new“ low-floor tramway system in the Sicilian capital Palermo started its operations much delayed at the end of 2015. As a matter of fact, the opening on 30 December 2015 was actually only one day prior to the expiry a deadline imposed on the Italians by the EU authorities; Had this deadline been missed, substantial EU-funds had to be retransferred to Brussels. The new tramway quickly became popular among the residents. The clean and modern appearance of the vehicles provided a striking contrast to the otherwise rather unpleasant environment in certain parts of the city.

Palmero’s tramway network is split into two parts, which are not interconnected and therefore require two separate depot installations. Connecting both parts cross-downton between the two train stations Stazione Centrale and Notarbartolo has been under discussion for years, as this route is also one of the trunk bus corridors of the city. In the meantime, there are public funds in the volume of EUR 426 mm available in order to take next steps. They will be used to extend route No. 1 from Stazione Centrale to the Stadium, connections between Piazzale de Gasperi and Stazione Francia, Stazione Centrale (route 1) and Calatafimi (terminus route 4) and between Notarbartolo (route 2, 3, 4) and Via Duca della Verdura (future route 1). All these exentions will provide a real network of tramway lines in Palermo. By doing so, the route length of currently 15 km will almost double. Another 20 km extension of routes, including a link to the seaside resort of Modello, are in the planning phase, although no funds were granted so far.

Currently there are four lines operating in the city:

The purchase of additional low-floor tramways is envisaged, as the current 17 Bombardier “Flexity” trams are not sufficient to exploit the full potential of the new services.

With a few minor exeptions, all routes have their own right-of-way and are physically separated from the rest of the road traffic.

The tramway Palermo has already today and even more so in the future a significant impact on the development of an attractive public transport network in this densely-populated city of some 700.000 inhabitants. The “new” situation in Palermo is strikingly different compared to the other Sicilian tramway system in Messina, which was even under threat of total closure and only very recently it can be saidthat is now on the safe side based on additional funds being granted by the Central government in Rome.