Tramway Vitoria-Gasteiz opens its exention to the University 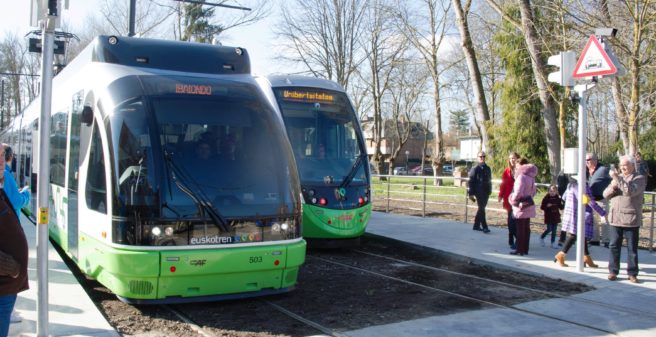 Saturday – 15 Februar 2020 at 12.00h: The modern, metre-gauge tramway system at the capital city of the Basque Country Vitoria-Gasteiz opened an 1.4 km extension to the Southern part of the city.

The three new stops Florida, Hegoalde and Unibertsitatea serve a densly populated area of the city and the University complex. Of the two existing tram route the line from Ibaiondo has been extened beyond the former city terminus at Angulema over the entire new section while the other route from Abetxuko now has its terminus just one stop beyond Angulema, at Florida.

In less than a year another extension of Vitoria’s tramwway is to be opened, we reported on the topic and also about the new BRT electric bus system here: https://www.urban-transport-magazine.com/en/vitoria-gasteiz-goes-ahead/

The other route will then continue beyond Florida on a a new 2.5 km section to the eastern part of the town, to Bulevar Salburuna.

Seven new low-floor tramways of CAF’s „Urbos” model which were ordered for the expansion of the network, are gradually introduced on the line. Delivery of the first vehicles had started in December 2019. These new bi-directional tramcars have seven modules, two more than the existing 11 trams delivered also by CAF for the opening of the system in 2008/09. Four of these vehicles will be send to the tramway in Bilbao which also is to be extened. Both systems are operated by the regional public company Euskotren which also operates various metre-gauge regional train services in the Basque Country.