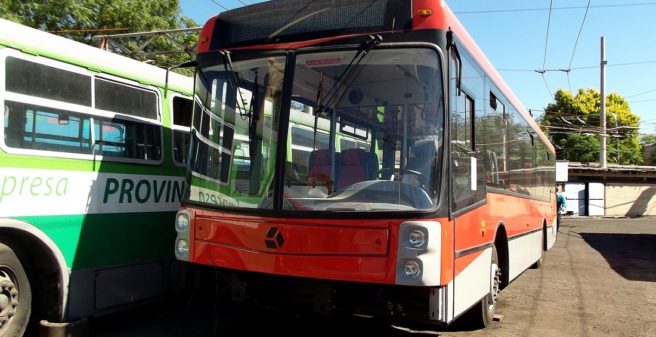 A modern Marterfer low-floor Trolleybus in Mendoza, out of service after just a few years of operation | © Samuel Fuentes

Trolleybus operation in Mendoza, Argentina, has come to an end: Since February 2021, all remaining low-floor trolleybuses of the local manufacturer Marterfer have been stored outside the network, and some have had their electrical equipment removed. After an interruption of more than one year, eight of these trolleybuses, which were built new in 2013-2015, had resumed electric operation in January 2019, however, already a little later new battery buses gradually replaced all trolleybuses on the remaining (circular-) line 130, previously referred to as line 1 Parque. The other five trolleybus lines had already been abandoned before, during 2016 and 2017 – some of them after just 11-13 years of service. The overhead system is still in place to a large extent today and could be used by modern battery trolleybuses in the future, as done by many other trolleybus operators around the world. However, there are currently no plans to introduce this state-of-the-art technology in Mendoza. It remains difficult to understand why – in the light of worldwide revival of electric urban mobility solutions – a fully operational trolleybus network which covered most part of the city, was given up without obvious reasons, operation some of the lines was passed on to private operators and investments were exclusively made in less environmentally friendly diesel, hybrid, gas or battery buses.

More about the trolleybus in Mendoza here: