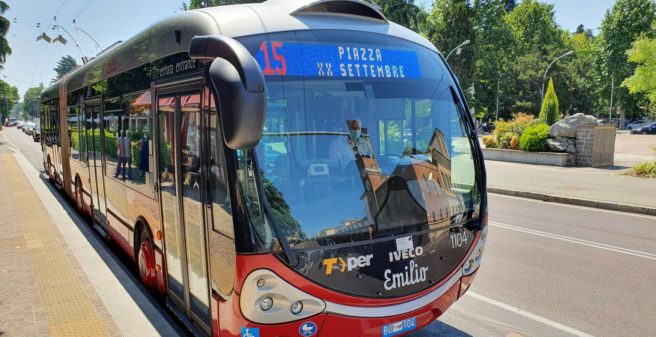 The Iveco Crealis are being used on line 15 as well as on existing lines 13 and 14. The new 15 is the first part of the trolleybus extension project with optical guidance, which has been planned for almost 20 years but has been on hold due to technical problems and a lack of approval by the Italian authorities. The configuration of the previously delivered Irisbus CIVIS has never been approved by the Italian authorities, in spite of various testing cricles and the fact that the same guidance system is used elsewhere, e.g. in Castellón in Spain. The original CIVIS vehicles are still in as-new condition parked at the premises of a commercial vehicle dealer in Northern Italy awaiting their fate.

The new Crealis use the lane guidance on line 15 only to arrive at stops, so that the distance between the bus and the edge of the road is reduced to a maximum of 6 cm.

The new line 15 operated during July only at a 24 minutes headway and ceased service inAugust due to the Italian holiday season, therefore some technicals considered the service a kind of „operational testing with passengers“. Full service resumes on 31 August 2020. Other branches of route 15 are expected to open over the next 1 to 2 years.