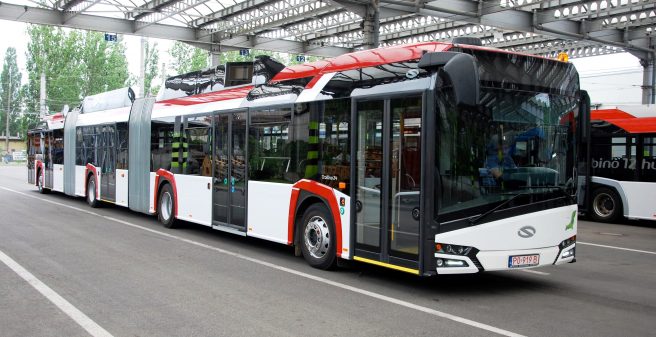 Solaris invited to an “electric bus conference” in the Polish city of Gdynia from 26 to 28 June 2019. The city was chosen as a venue because it has the largest of the remaining three trolleybus networks in Poland today. In addition, the fleet of Gdynia’s public transport operator PKT features a variety different propulsion variants:

The only missing propulsion are fuel cells which are not (yet?) to be found in Gdynia.

Solaris took the opportunity to demonstrate its first double articulated trolleybus. The vehicle is called “Trollino 24”. It is currently in Gdynia for testing and occasional demonstration rides. The result of this extensive test rides will allow for the final homologation to enter public service.

Despite its name “Trollino 24”, the new double-articulated trolleybus from Solaris is almost 25 meters long, 24.77 meters in fact. It has a five door layout – two doors in the front, one in the middle and again two doors in the rear section. It is powered by electric motors which power the second axle of the front end and the axle of the center section. The fourth axle, which is the axle of the rear section, is steered. As a result the Trollino 24 is just as manoeuvrable as a simple articulated bus.

A short demonstration trip “Solaris Trollino 24” was undertaken within the depot area of the PKT, because the bus does not yet have necessary permits to be used on public streets.

The official world premiere of this new model will be at held the “Busworld” at the Brussels Exhibition Center in October 2019.