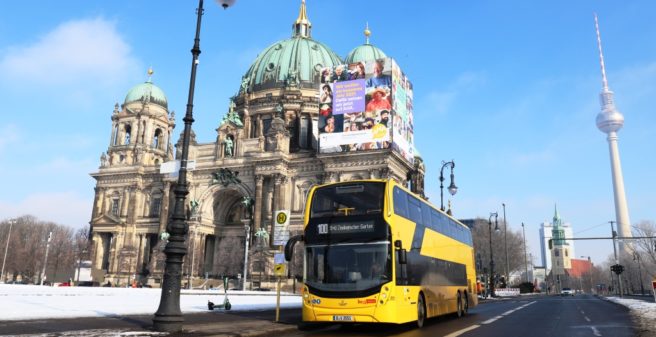 Green light for the new Big Yellow. For four months, BVG tested two examples of its new Enviro 500 double-decker from the British manufacturer Alexander Dennis. BVG has ordered a further 198 double-deckers, which will be on Berlin’s roads from the end of the year. The delivery should be complete by the beginning of 2023. Options for a further 230 Enviro500 double deckers remain in the contract.

In addition to the passengers on line 100, various interest groups, the workshop and driving staff of BVG were also involved in the test.

Dr. Rolf Erfurt, Director of Operations at BVG: “Our greatest experts for daily use are the ones steering the buses. A total of 40 colleagues have been able to test the buses during the past months. They were on the road for over 7,000 kilometres in the city, even on difficult routes and all conceivable road surfaces. The drivers particularly praised the driving, braking and steering behaviour of the buses. The newcomers were also well received in the workshops.”

Of course, the test and trial phase also served to collect suggestions for improvement, which will now be incorporated into the series delivery. In addition to changes under the fairing and at the driver’s workplace, there will also be visible improvements for passengers. Here are three examples: The door opening buttons and USB ports in the multi-function area will be rearranged so that passengers in wheelchairs can reach them more easily. The information screen facing in the opposite direction to the direction of travel will be enlarged and can now also display the next three stops, including transfer connections. In addition, there will be an additional holding option at the rear staircase in the upper deck.

Production in the UK

Berlin’s new generation of iconic yellow double deck buses is the first to have been designed in Britain by ADL, the world’s leading supplier of double deck buses. Production of all 198 units will take place in the manufacturer’s facilities in the United Kingdom, with the Scarborough site in Yorkshire to lead final assembly.

Once delivered, they will be supported locally by an experienced team operating out of ADL’s recently opened Berlin office, service workshop and parts warehouse. ADL will increase its investment in Berlin to underpin the fleet roll-out and support its European expansion, and recruitment is underway for additional team members.

Berlin’s Enviro500 are 13.8 metres long and 4.06 metres tall. With three doors and two staircases, they facilitate rapid boarding and alighting on busy urban services for up to 112 passengers, 80 of them seated, while minimising road footprint.

We reported about the roll-out of the two ADL buses in Berlin here:

Paul Davies, ADL President & Managing Director, said: “This fantastic news is testament to the incredible efforts of the hugely talented team that we have here at ADL, who have yet again demonstrated that they can innovate and execute on highly complex product development projects. The successful results of BVG’s testing programme and the award of this milestone contract are yet another ringing endorsement of our global double deck expertise and customer focus.

“We are delighted to confirm that we will build these buses in Britain to help underpin our skilled jobs and apprenticeships.”