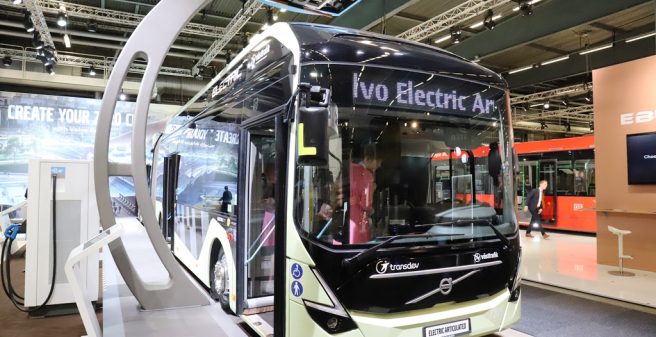 At the UITP Global Transport Summit, Volvo Buses announced the introduction this autumn of an all-electric articulated bus with space for up to 150 passengers. The new articulated bus is based on the prototypes that since June 2018 have been running in test operations on the high-frequency route 16 in Gothenburg, Sweden. The two concept buses have thus far run for 4,500 hours and covered more than 62,000 kilometres.

The Volvo 7900 Electric Articulated in commercial configuration will be available in a choice of two lengths – 18 and 18.7 metres – and it is designed to meet high demands on capacity, comfort and traffic information, while at the same time offering efficient passenger flow. The bus can be fitted with up to 6 Li-Ion battery packs of 200 kWh each. The batteries will be charged both via fast-charge stations at either end of the route, and via overnight charging at the depot using CCS. At the UITP, Volvo presented its’ 7900 with an OppCharge charging station and three different CCS plugs for DC- and AC-charging. The Volvo 7900 Electric Articulated will be unveiled to the public at the Busworld exhibition in Brussels in October.

Volvo Buses decided already some time ago to only offer hybrid and electric city buses. As per today, Volvo offers the following electric and hybrid buses: