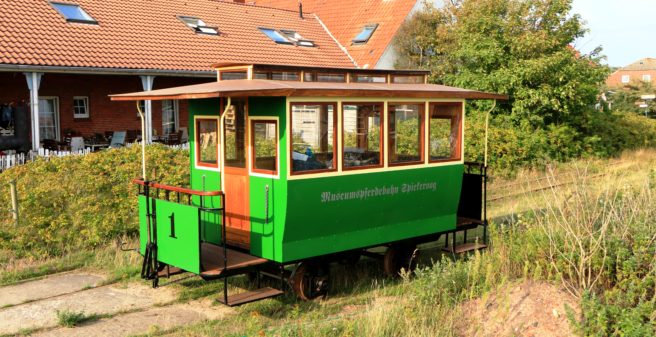 Tamme and Eddie – that are the names of the two powerful horses of the Tinker breed “working” for the small horse tramway on the island of Spiekeroog, in Eastern Friesland in Northern Germany. They provide the “engines” power for the vehicles used on the 1.6 km long line.

The Spiekerooger Inselbahn (island railway) is a unique survivor among Germany’s once numerous local railway lines, as it is still operating on the original route between Easter and October each year, for the pleasure of the local residents as well as for island visitors – all this looks almost the same when it operations began some 135 years ago. At least until last season 2019.

Since then the operation did not resume, first because of the Corona crisis, but more importantly there is a need to replace the levee gate, which allows the train to pass the dyke. Usually it is closed in winter, however, it has not been in safe condition for quite some time already. Last winter, therefore, a large number of sandbags had to be piled up as a reinforcement. Although this temporary solution can easily be reversed and the sandbags can be removed and refilled next winter, it is of course no permament solution going forward. In addition, the municipality of Spiekeroog refused to cover the costs for the already abbreviate 2020 season, the sandbags are still there and prevented the passage of the island railway. Currently discussions are going on between the municipality and the regional government of Lower Saxony about the coverage of costs for the reconstruction, but no decision has been reached yet and therefore the future of the horse-drawn railway remains uncertain. This may come as a surprise, since the tourist value of the small railways is undisputed and recognized by all sides.

Until 1981, the once 3 km long route connected the small village in the middle of the island with its old, wooden pier located on the Western edge some 500 meters out in the middle of the North Sea. At that time, all passenger and goods traffic had to use not only the ferryboats, but also the island railway – until newly-built port facilities located close to the village made the old installations and the connecting railway redundant and superfluous to requirements. Passenger transport came to an end on 31 May 1981, followed by freight transport during early 1983. With the exception of one trainset composed of diesel locomotive 4 and two passenger cars and exposed on display until 2000, all other vehicles left the island shortly afterwards.

However, Spiekeroog’s metre-gauge island railway did not disappear completely: Looking back today it seems to be a small miracle that it was possible to set up from scratch a horse-drawn tramway operation over parts of the old track using two little carriages from the Stuttgart Straßenbahnmuseum. The current operation keeps alive the memory of the long tradition of horse tramways driving on the line, which lasted from 1885 to 1949. Only then, in 1949 diesel locos took over the operation for the next 32 years. Since 1981and only during summertime, the horse-drawn tramway continues to run between the old train station in the village and up to the Western part of the island.

The small horse railway has become a real landmark over the last 39 years. It is of course a tourist attraction of high value. As it is so often the case, the realization of this project was only possible thanks to the commitment of only a very small number of supporters at the beginning. In the case of Spiekeroog, most of the praise belongs to Stuttgart-based Hans Roll, who persuaded the municipality early on in the 1980s not to dismantle the tracks over its full length, but to keep what is today the island’s single route. In the first years, he even took care of the operation by himself. The initially planned service up to the Zeltplatz (camping ground) could not be realized, but at least the current route covers a good part of the very first line of 1885.

And in another perhaps surprising, but by any means pleasing turn of history, his son Christian is now the operator of the railway. He moves to the island every summer from Berlin since 2015, and his engagement and commitment in the daily service is hard to be overlooked. He is also in charge of the two horses Eddie and Tamme – they have proven to be particularly suitable for pulling the light vehicles on the metre-gauge tracks. They are the “stars” especially among the numerous children who visit the island with their families each summer.

Between three and eight trips are usually offered on the route, depending on the weather and demand. However, due to the current situation and the before mentioned problems, the operation is currently on hold. Hopefully, this will change again in the 2021 season at the latest – many, many tourists and of course also railway enthusiasts hope for a resumption of operations as soon as possible.

Backbone of the service is an open summer car once built by the Stuttgarter Strassenbahnmuseum based on a historical model. A second car (ex Reutlingen) proved to be too heavy in 1981/82 and was returned shortly after, however, another vehicle is on the island since 2014. It originally ran on standard-gauge wheels tracks as a replica of a Berlin horse-drawn tramway model at Europapark Rust, a fairground attraction park in Southern Germany. With the support of members of the Spiekeroog Museumsverein (association), it was converted to metre-gauge, by using the axles of an earlier Spiekerooger horse-drawn vehicle carriage with the former number 12, which had been acquired from the last German municipal horse tramway in Stadthagen in 1930. Without any doubt a remarkable reminiscence of the former operation on the island!

Hopefully we will all hear the ringing and rattling of the horse-drawn railway on the North Sea again soon – there will certainly be no shortage of passengers!